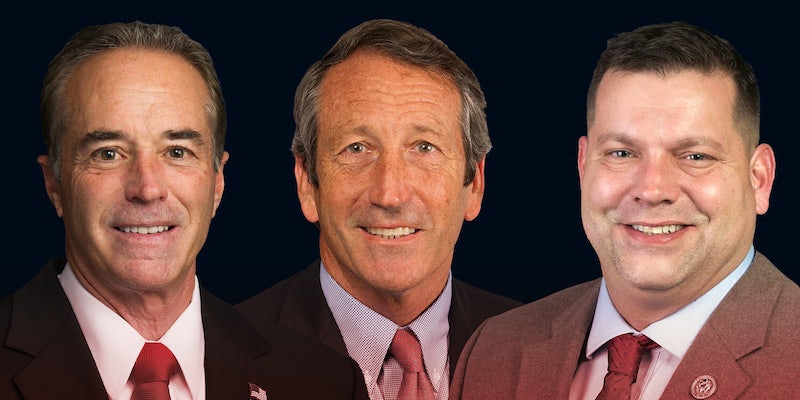 Photos via US Congress/Wikimedia (Public Domain) Remix by Jason Reed

After House Republicans on Thursday passed the American Healthcare Act (AHCA), a bill that could leave millions with inadequate coverage, they celebrated by drinking beer in the White House’s Rose Garden and appeared before television cameras tout their success.

Some, however, admitted having not read the bill at all.

When asked directly by CNN’s Wolf Blitzer whether he had read the full text, Rep. Chris Collins (R-N.Y.) was the first to confess he hadn’t.

“I will fully admit, Wolf, I did not, but I can also assure you my staff did,” he replied to the anchor. “We have to rely on our staff.”

Then, confronted by a Buffalo News reporter who informed the congressman how the bill would strike $3 billion from his own state’s Essential Health Plan, which serves 635,000 New Yorkers, Collins, clearly stumped, responded: “Explain that to me.”

Collins is not alone in having not read the bill. Member of the ultra-conservative House Freedom Caucus, Rep. Mark Sanford (R-S.C.) stumbled through his admission, claiming that he’d “attempted” to read the bill and had “flipped through every page.”

"I attempted to read the entire bill" @RepMarkSanford to @AlisynCamerota on the GOP health care bill he voted for https://t.co/FuLxZQurc3

No admission, however, was as honest and damning as that of Rep. Tom Garrett (R-Va.).

“Oh, gosh,” he responded when challenged on MSNBC. “Let’s put it this way: People in my office have read all the parts of the bill. I don’t think any individual has read the whole bill. That’s why we have staff.”

The prospect that lawmakers had neglected to even read such a serious and key piece of legislation has infuriated voters.

When you vote for a bill you didn't read & you have no idea of the costs or impact, clearly you're not voting your constituents' interests!

Why read it. The party ordered it. So it didn't matter if the bill was good or bad.

The AHCA stands at around 200 pages in length, to which three pages of last-minute amendments were added ahead of the vote. Despite the excuses, House Majority Whip Steve Scalise (R-La.) insisted to CNN’s Jake Tapper that “every member who voted on this bill had more than enough time to read every aspect of it.”