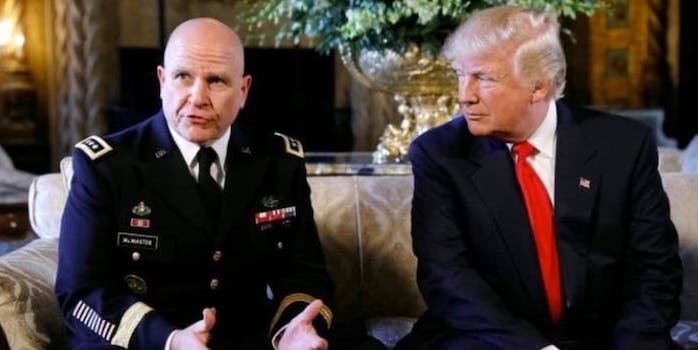 'You just leave on a high note.'

President Donald Trump named Army Lt. Gen. H.R. McMaster as his new national security adviser on Monday. To mark the occasion, Jake Tapper shared a video of a 2015 panel he moderated at CNN’s Future of War conference in which McMaster discussed how emerging technologies—or rather, the “over-promise of technological advantages”—are impacting modern warfare.

The entire 41-minute discussion is worth your time, but it’s one particular reference—a lighter moment about six minutes in—that inspired Tapper to share the old video on Twitter.

That’s right: Gen. McMaster likened Rapid Decisive Operations, military efforts that were supposed to be “fast, cheap, efficient,” to the “George Costanza approach to operations: You just leave on a high note. You just go do some military things and then leave.”

That’s a sharp contrast to McMaster’s strategy in Iraq from June 2004 to June 2006, which relied on a counterinsurgency plan that empowered the local populace.

The reference inevitably made its way back to Jason Alexander, the actor who embodied George Constanza on the hit show and who has been critical of the Trump administration, posting two comedic tweets about him just this month.

Alexander clarified in a follow-up tweet that he wasn’t criticizing Gen. McMaster, who he said “seems [like] a fine man.” Rather, he was commenting on the surrealism of a national security leader referencing a Seinfeld character that slept under his desk at work when discussing military strategy.

And lastly, my comment intended no disrespect to Gen. McMaster, who seems a fine man. Just the weirdness of any leader quoting "George".

Regardless, his response drew criticism from Trump’s supporters, who appeared to misinterpret his rather benign statements.

You don't see me telling anyone to shut up. I welcome decent discourse. https://t.co/vPQm5KupNF

Capt., with respect, noting hypocrisy, lies & flagrant disregard for more than half of Americans isn't being an a-hole, it's pointing at 1. https://t.co/hK2Iilk4Vl

And no sir, I will not "shut my mouth". You served our country for it's freedoms, I'll damn well exercise them. thank you for your service. https://t.co/hK2Iilk4Vl

Let’s just hope we get a summer of George after this.