Why McDonald’s is letting customers use love as currency

Call a loved one, compliment a stranger, fist-bump the cashier. The choice is yours, the food is free.

I am surrounded by McDonalds PR staff in the iconic Times Square Mickey D’s, a 17,000-square-foot Escher-esque dining facility that seems far bigger on the inside than its small facade suggests.

As explained to me, the premise was simple: Whoever ordered a meal at 2:43pm would get their food for free in exchange for engaging in a lighthearted act of goodwill, or in McDonald’s parlance, “loving.”

I meet the lucky patron, a guy named Brandon decked out in fabulous eyewear, immediately after he placed his order. He was ready to pay for his lunch with conventional money, but the cashier told him he could pay with lovin’ instead and his meal would be free.

Brandon called a friend and had a quick chat with her at the counter before saying goodbye. Then he was on his way, free meal in hand. 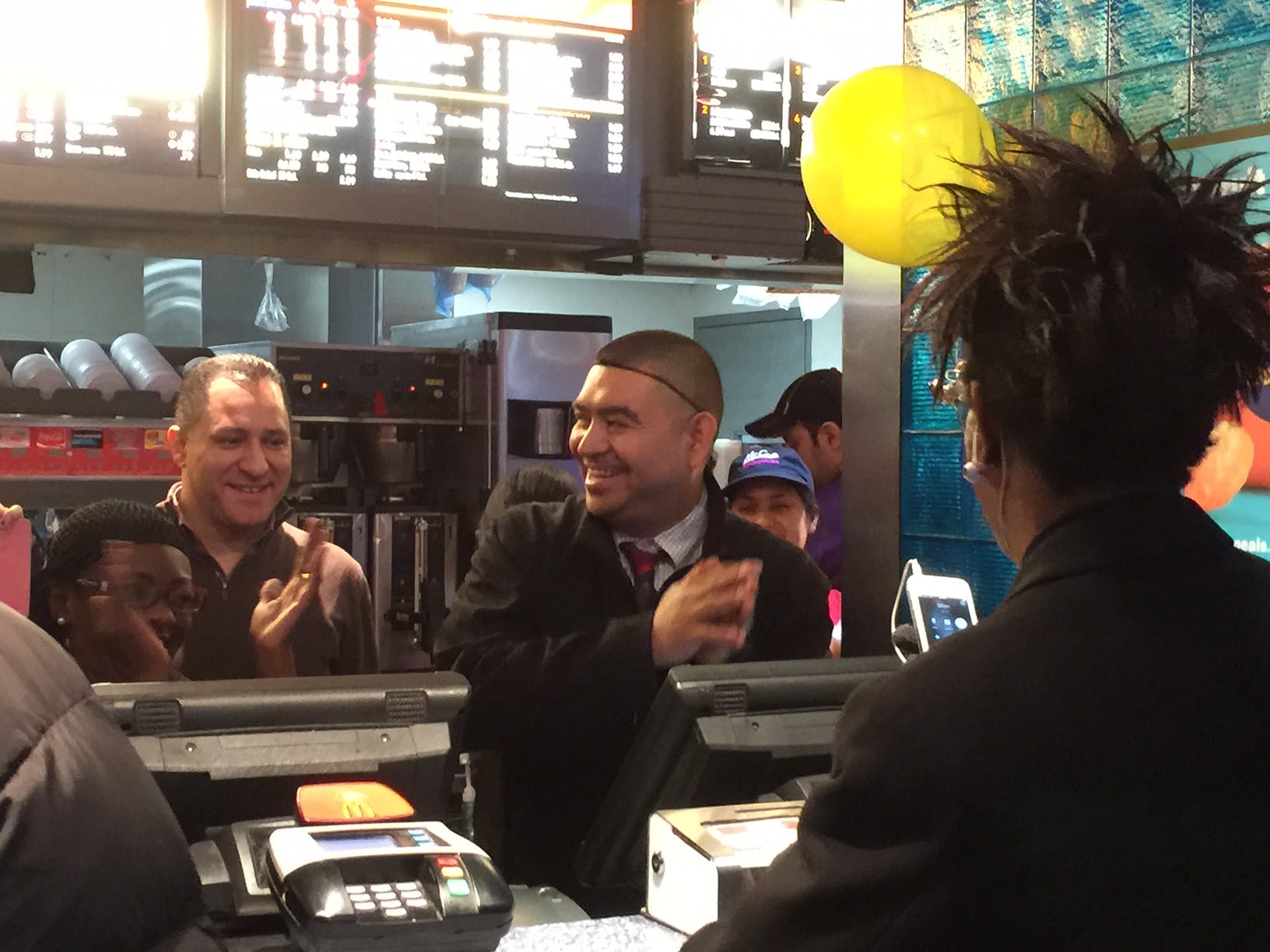 Brandon gets applause upon his order.

This particular afternoon, the witching hour was 2:43, but it could’ve been any time at all. These times are randomized each day down to the second, delivered to McDonald’s locations from the company’s Chicago headquarters in sealed envelopes. There may be several of them each day. Managers are in charge of delivering the good news to the appropriate customer at the appropriate time, and everyone rejoices in the siren song of free fast food.

Jim Lewis is a prominent McDonald’s franchisee, the owner-operator of several locations in New York City, including this Times Square operation. “There was a whole conversation about where the brand was today and where it should be tomorrow,” he told me. “The ‘I’m lovin’ it’ slogan has been part of our brand for years, so it just seemed like a natural extension—if we’re gonna make ourselves lighter and younger, let’s pick up on the word ‘loving.'” 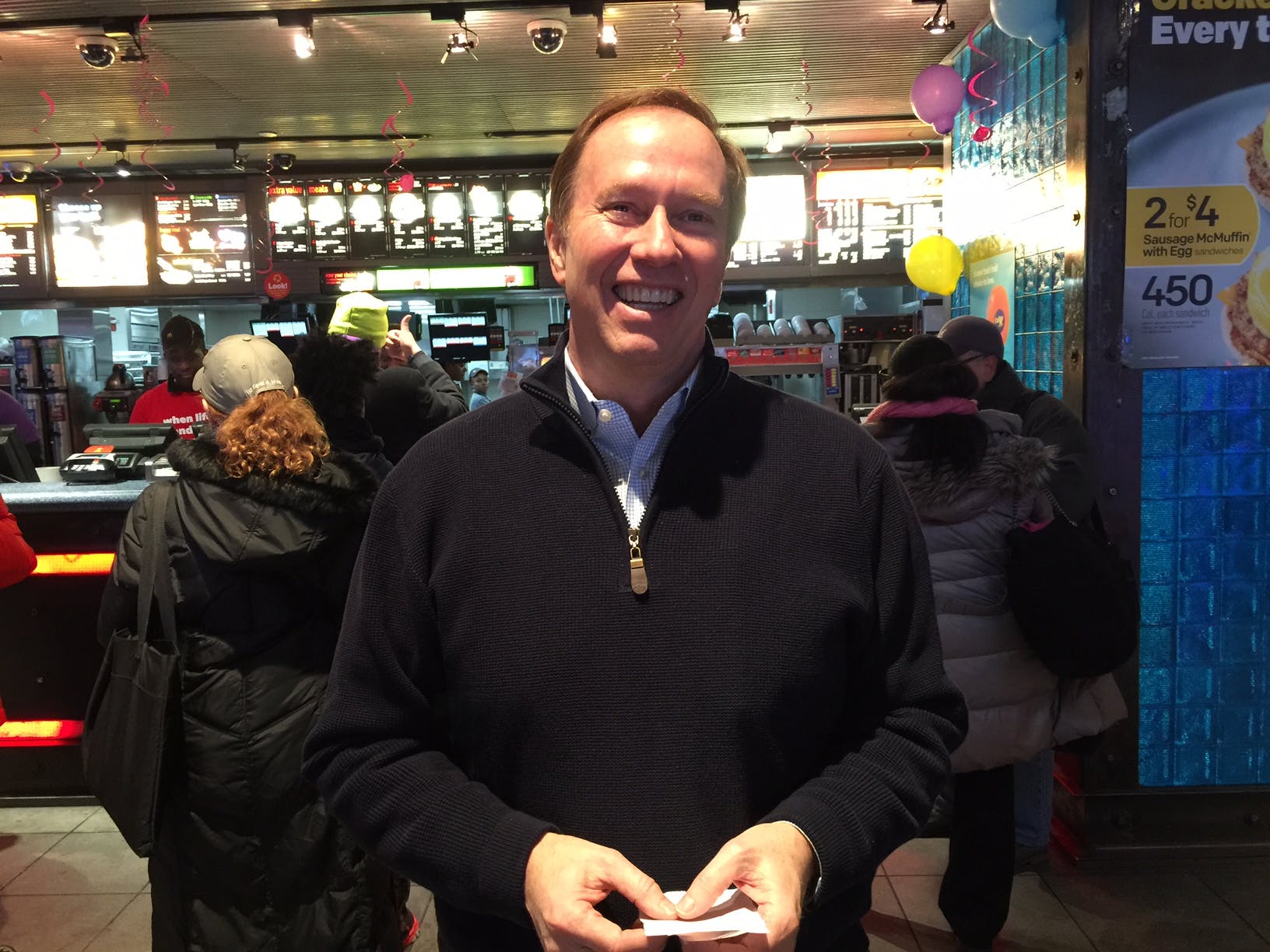 The way Lewis talks about this promotion, which runs until 6pm on Valentine’s Day, you get the sense that the company is earnestly engaged in brightening strangers’ days at random.

Customers only find out that their meal is on the house after ordering. The staff told me about a frowny-faced, grumpy customer, who ordered nothing but a cup of coffee—but had done so at the right time, getting it for free. He smiled and told the cashier that it was the first time he had smiled in three years.

“There’s an awful lot of hating in the world,” Lewis said. “What a unique position McDonald’s is in to have millions of customers a day to impact with ‘maybe life doesn’t have to be so crappy.’ Maybe it can just be a little simpler, easier, and frankly, nicer. Do we think it’ll help the image of our brand to some degree? Sure. But it seemed like a natural place to be.”

So how can you demonstrate love and get free food? Acceptable forms of McDonald’s hippy currency include:

So get in line at McDonald’s. If you’re lucky enough to place an order at the right time, your meal will be gratis. Just be prepared to be gregarious in order to “pay” for it.

Photo via Vacacion/Flickr (CC BY 2.0)