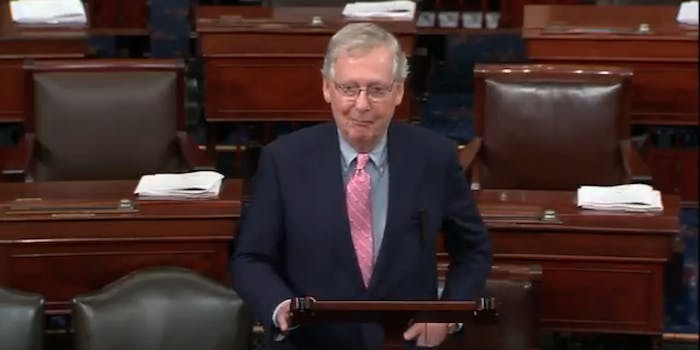 Conservatives, on the other hand, like what the Senate Majority Leader had to say.

Senate Majority Leader Mitch McConnell’s mocked a Washington Post report into the finances of President Donald Trump’s Supreme Court nominee Brett Kavanaugh, only to be slammed online for his dismissal of the newspaper’s findings.

The Post article, published on Wednesday, spotlighted Kavanaugh’s debts and use of credit cards. It reported that in 2016 the nominee had reported accrued debt of between $60,000 and $200,000. When questioned on the matter, White House spokesman Raj Shah claimed Kavanaugh had built up the debt buying baseball tickets for himself and his friends.

So, in the middle of a tirade against the Democrats’ “outlandish” attempts at trying to stop the nominee’s confirmation, McConnell took aim at the article as an example of what he claimed was an attempt at “blatantly misrepresenting the record and character” of Kavanaugh.

“In a breaking news bombshell report just last night, we learned that Judge Kavanaugh enjoys America’s past time. Investigative reporters scoured his financial disclosures and learned that he and his friends buy tickets to baseball games and that he pays his bills,” McConnell said in a speech on Thursday.

Other Twitter users were less convinced that the report was a liberal media smear campaign though, and quickly made their feelings known in comments beneath the video. For many it wasn’t so much how Kavanaugh had gotten into debt or what over, but the fact that in 2017 it appeared his three credit cards and loan had somehow been paid off.

It’s not that he likes baseball.
It’s that upwards of $200,000 of debt magically disappeared off his Statement of Net Worth. And without selling his house.
Where did the money come from Mitch?
GOP? NRA? Russia Oligarch?

No, we learned that he was $217,000 in debt and mysteriously in 2017 it was paid off. His job didn't change. He didn't get a windfall. And the statement that he ran up the debt because of baseball seats is irrelevant. Who paid it off getting him ready for Scalia seat in 2017??

Across the right-wing media sphere, however, McConnell’s mockery of the Post article was echoed. The Daily Wire, for example, sarcastically described the report’s “game-changing revelations” implying they didn’t care how he cleaned up his financial record.

Instead, all they cared about (as always) is that McConnell “owned the libs.”

I thought watching the left attack Amy Coney Barrett for being Catholic was going to be fun, but watching them attack Kavanaugh for liking baseball, using credit cards, and drinking beer is SO MUCH BETTER.