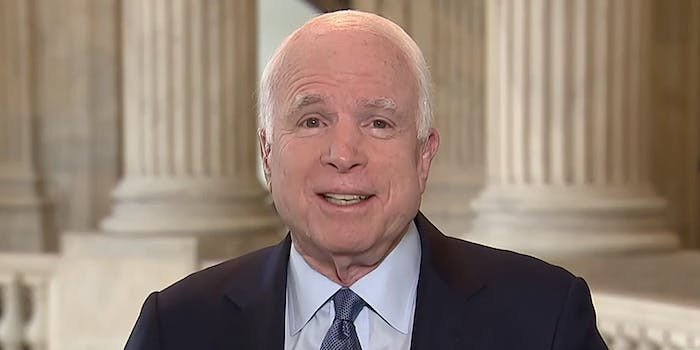 Sen. John McCain (R-Ariz.) poked fun at President Donald Trump’s claims that he is being treated poorly by the media.

During a Thursday morning interview with MSNBC, McCain made a joke in reference to Trump’s comments at the United States Coast Guard Academy on Wednesday where he said that “no politician in history” has been treated as unfairly as he has.

“First of all, I’ve been worse treated than President Trump has,” McCain quipped, eliciting laughs from the MSNBC crew.

On Wednesday Trump gave a commencement address to the graduates of the Coast Guard Academy where he harped on the media for a good portion of the speech.

“Never, ever, ever give up; things will work out just fine,” Trump said to the graduates. “Look at the way I’ve been treated lately, especially by the media. No politician in history … has been treated worse or more unfairly. You can’t let them get you down. You can’t let the critics and the naysayers get in the way of your dreams.”

During the rest of the interview, McCain said he had “great confidence” in the U.S. intelligence community’s investigatory abilities, but he advocated for the formation of a select committee to investigate the possibility of ties between Trump’s campaign and Russia.