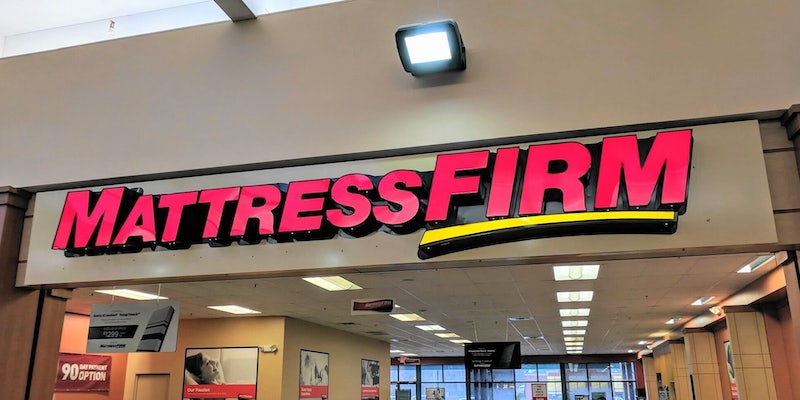 What is the Mattress Firm conspiracy theory?

There does seem to be a lot.

First off, we know what you are thinking. And yes, it’s real. There is a Mattress Firm conspiracy theory floating around the internet. People believe it.

What is the Mattress Firm Conspiracy Theory?

It holds that the surplus of mattress stores around the country, and their proximity to each other, is actually a complicated scheme to advance a criminal enterprise of some kind. It’s also an attempt to answer the question “why are there so many mattress stores?”

Are there really that many mattress stores around the country?

At the time the conspiracy theory went viral, there were as many as 3,500 Mattress Firm stores nationwide—and 9,200 mattress stores total (counting every chain). And they do tend to cluster together, with competing chains usually putting stores very close to each other. So it’s not an illusion.

How did the Mattress Firm conspiracy theory start?

It began, as so many popular conspiracy theories do, on social media. In this case, it began with a January 2018 post on Reddit called: “What conspiracy theory do you 100% buy into and why?”

Someone responded “Mattress firm is some sort of giant money-laundering scheme. They are f-ing everywhere and always empty. I remember seeing 4 mattress firms all on each corner of an intersection once, there is no way there is such a demand for mattresses.”

Soon, the thread was full of people agreeing that mattress stores tend to cluster together and that they seem to be on every corner.

The reasoning thrown around in the thread is that there is simply no legitimate reason to have so many stores in such close proximity to sell a product most Americans buy once a decade. So they have to have some kind of ulterior motive, either hiding money, tax evasion, or gobbling up real estate for future use.

But Mattress Firm is up to no good, in a way

Mattress Firm was one of many competitors in the mattress field until South African retail giant Steinhoff bought the company for $3.8 billion in 2016.

After that, Mattress Firm spent several years in a period of aggressive expansion. They bought up a number of smaller mattress companies and took over their empty stores under their old names, while also building a number of new stores under the Mattress Firm name. The end result was that many city dwellers can walk across the street to get a better deal—but not realize they’re actually buying from the same company. Some firms even give the same mattress different names, all done to create the illusion of choice.

I dropped the fellas off at a party & rushed home to watch conspiracy theories on “Mattress Firm”… Talk about a piping hot Friday night!!

Was this the first time anyone put it together?

No, even before then, people were noticing that everywhere they went, there seemed to be a giant, mostly-empty mattress store. And that these stores tended to cluster together.

In July 2016, the Chicago Tribune noticed that the city seemed to have a mattress store on every corner, and that nobody was ever in them. The paper even spoke to the head of Mattress Firm, who agreed that there were probably a few dozen too many in the Chicago area.

As Mattress Firm’s CEO told the Chicago Tribune, the chain aims for one store for every 50,000 residents. Meaning a large city could have hundreds, all by design. So even though the mattress store glut seems excessive, there are real reasons for the expansion.

Is that reason money laundering or tax evasion?

No, it’s economics. One study found that a typical strip mall mattress store has to sell just one mattress every working day to stay afloat—or about 20 every month. A huge store selling even just two mattresses a day will make its owners a great deal of profit.

And that product is hugely marked up. Mattresses are fairly cheap to make, but sold for many times that, sometimes 40-50% more than their production costs. Many high-end mattresses cost a few hundred dollars to make, and sell for well into four figures. And what you see in a store is usually just a sample, with the majority of mattresses being stored off-site. So the stores are really just a warehouse with almost no inventory that need to do almost no business to justify their existence.

This is why when you go into a mattress store, you’re typically going to only see one or two salespeople on the floor. There’s no need for more.

Has online shopping killed the need for mattress stores?

No, Americans typically buy mattresses in person, so they can lie on and touch different ones to see which one is the best fit. Though the percentage of mattresses bought online has increased in the last year, it’s still less than half of all mattresses bought overall. The majority are bought the old-fashioned way.

And the economic revival of the last few years means Americans are finally making major purchases they put off during the worst years of the Great Recession. That was a particularly hard time for the mattress industry, as foreclosures and lost jobs contributed to fewer people buying new beds. But a better economy has given people the income to replace or buy new mattresses to fill up the new houses they’re buying.

Not really. In the end, even Mattress Firm finally realized Mattress Firm expanded too much. In October 2018, they announced they were closing 700 stores and filing for bankruptcy to restructure the debt taken on buying all those smaller companies.

So the biggest mattress company in America directs customers to competitors it owns, marks up its product by thousands of dollars, sells the same products under different names, and took on huge debt without paying it off? That sounds like a conspiracy.

It might be a bad business strategy, but it’s no different than most other major industries. It’s just more obvious with mattresses.