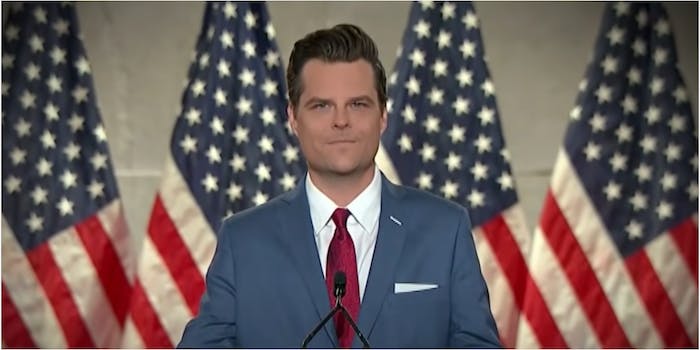 No one put their name to it.

A bizarre, anonymous statement signed by the “Women of U.S. Congressman Matt Gaetz’s Office” is circulating amid the representative’s sex scandals.

Rep. Matt Gaetz (R-Fla.) is under investigation for sex trafficking by the Department of Justice over his alleged romantic relationship with a minor. The allegations have had Gaetz looking for any allies to come to his defense, including former President Donald Trump. Now the women who work for him are stepping up, although not including their names.

The statement says that “in our office and under Congressman Gaetz’s leadership, women are not only respected, but have been encouraged time and time again to grow, achieve more, and ultimately, know our value … In our professional ecosystem, women are given every opportunity to advance and utilize our talents to help the country in the best possible way.”

But the author or authors of the letter did not associate their name with the statement, not even Gaetz’s chief of staff, Jillian Lane Wyant, who is female.

Almost everyone on Twitter is confused why no woman signed their name on the statement.

“Huh… will they feel the same if he’s convicted? Why no names? ‘The women of….’ hmmm,” one Twitter user said.

“anonymously telling everyone that your boss is actually not a creep,” another person added.

“Which women? Name them,” another tweeted.

Gaetz has denied all the allegations against him, saying they are part of an extortion attempt.