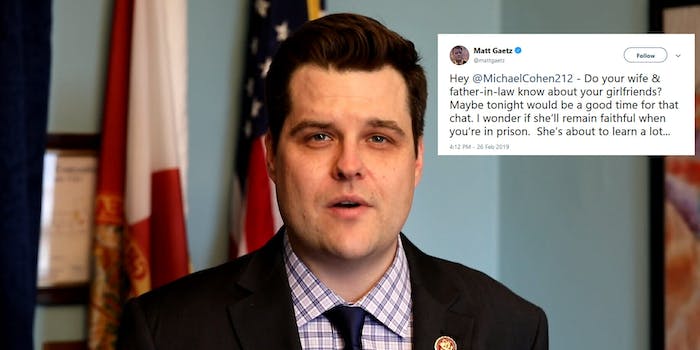 Rep. Matt Gaetz (R-Fla.) went after Michael Cohen, the longtime lawyer to President Donald Trump, ahead of his highly anticipated testimony before the House Oversight and Reform Committee tomorrow morning.

Cohen is reportedly expected to accuse Trump of committing criminal conduct during his discussions with lawmakers this week. It appears that Gaetz, a staunch supporter of the president, isn’t thrilled with that idea.

The Florida lawmaker tweeted at Cohen on Tuesday afternoon, asking him if his family “know about your girlfriends?” and adding: “Maybe tonight would be a good time for that chat. I wonder if she’ll remain faithful when you’re in prison. She’s about to learn a lot…”

Gaetz is not on the House committee that will be hearing from Cohen on Wednesday. However, he has campaigned with Rep. Jim Jordan (R-Ohio), who is the ranking member. Gaetz also had a fundraiser in 2017 with Roger Stone, a longtime Trump insider.

The Florida lawmaker denied that he was threatening Cohen while talking with the Daily Beast.

“No,” he told the news outlet, “it is challenging the veracity and character of a witness. We do it everyday. We typically do it during people’s testimony… This is what it looks like to compete in the marketplace of ideas.”

UPDATE 7:25 a.m. CT: Late Tuesday Gaetz deleted the tweet after House Speaker Nancy Pelosi (D-Calif.) put out a statement calling for lawmakers to be “mindful that comments made on social media or in the press can adversely affect the ability of House committees to obtain the truthful and complete information necessary to fulfill their duties.”

The Florida lawmaker quote-retweeted Pelosi and said he was deleting his original tweet.

“Speaker, I want to get the truth too,” he wrote. “While it is important 2 create context around the testimony of liars like Michael Cohen, it was NOT my intent to threaten, as some believe I did. I’m deleting the tweet & I should have chosen words that better showed my intent. I’m sorry.”