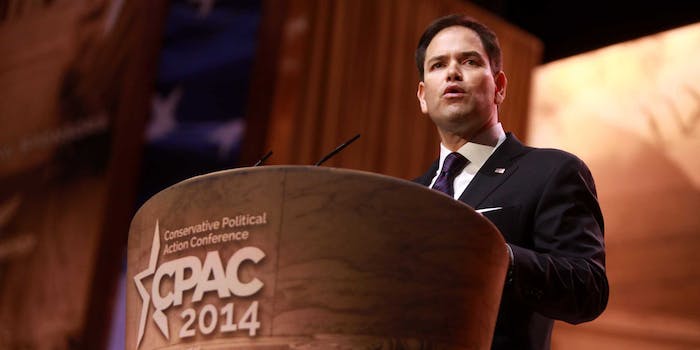 Democrats call for gun control. Republicans call for prayer. Here's what that says about each side.

Mass shootings now occur so frequently that presidential candidates no longer pause to acknowledge each one individually.

Wednesday’s shocking attack in San Bernardino, however, was enough to warrant an outpouring of support from all of the major candidates, reflecting the grief of all Americans watching the news unfold. Most of the Republicans sent thoughts and prayers to the victims and first responders, while the Democrats called for stricter gun-control laws.

Praying for the victims, their families & the San Bernardino first responders in the wake of this tragic shooting.

California shooting looks very bad. Good luck to law enforcement and God bless. This is when our police are so appreciated!

I refuse to accept this as normal. We must take action to stop gun violence now. -H https://t.co/SkKglwQycb

“Thoughts and prayers” is a useful filler phrase at times like these, when it’s hard to think of the right words to contain your grief. For public figures, it’s also an efficient way of acknowledging awareness of a tragedy without expressing a specific opinion. But in the case of some politicians who vocally oppose gun-control legislation, those thoughts and prayers are beginning to ring hollow.

If the entire GOP presidential field really did stop to pray after every mass shooting, they’d barely have time left to campaign. And as many people have pointed out, these references to mournful prayer—even if they’re well-meaning and sincere—are essentially passive, transferring responsibility for public tragedies into the hands of God. A call for prayer is the opposite of a call to action.

Social media is a double-edged sword at times like this, because while it allows politicians to express sympathy in real time, it also allows people to search previous statements for contradictions and hypocrisy. Following the San Bernardino shooting, Twitter exploded with retweets of presidential candidates expressing support for the NRA.

In 2010, the NRA awarded me with Carter Knight Freedom Fund Award and I'm honored to be endorsed by Gun Owners of America #TXSen #TXDebate

Had the pleasure of speaking at @NRA convention in TN. I am extremely pro-Second Amendment and would never let anyone tamper with that right

This kind of juxtaposition tells a story in itself: The ritualized offering of passive “thoughts and prayers” for victims of mass shootings versus active support of the NRA.

The NRA has been a loyal supporter of many politicians throughout their careers in public office, as ThinkProgress’s Igor Volsky mercilessly demonstrated by following the money between the “thoughts and prayers” tweets and the NRA’s donations to various campaigns.

Sending my heartfelt thoughts and prayers to the people of #SanBernardino

Got $4,500 from NRA in 2014, meaning she'll work to reduce gun violence only using "heartfelt thoughts" https://t.co/IVgdOTxckN

The senseless loss of innocent life in #SanBernardino defies explanation. Our thoughts are w/ the victims & their families
— @SenateMajLdr

NRA dumped $922K into McConnell's re-elect bid, so when it comes to preventing gun violence all u get is this tweet https://t.co/RsSvFRDlZr

We also know from past experience that private donations to the NRA soar after mass shootings, adding yet more money to this complicated web of campaign financing, Second Amendment lobbying, and public displays of grief over mass shootings.

In 2012, NRA spent *$19.7 MILLION* on independent expenditures for candidates to only tweet #thoughtsandprayers in response to gun violence

Faced with the facts of NRA campaign donations, it’s hard to defend anti-gun-control sentiment as a purely principled stand for Second Amendment rights. It’s very easy, meanwhile, to draw a line between NRA support and a lack of willingness to see mass shootings as a solvable problem.