As the number of U.S. mass shootings reaches record highs, here's where we stand.

After every major mass shooting that dominates the news cycle, a routine aftermath unfolds: The nation grieves individuals lost and reports on the phenomenon of gun violence at large, politicians are criticized for offering thoughts and prayers rather than actual policy, and debates surrounding gun control, mental health, violence, and terrorism resurface.

Still, after yet another violent incident, the U.S. has failed to reduce the number of mass shootings by enacting effective gun control policies. Despite the 346 mass shootings in 2017 and 15,590 deaths as a result of gun violence, authorities can hardly agree on a standard definition of what a “mass shooting” is.

The Gun Violence Archive (GVA), which classifies a mass shooting as an incident in which four or more people are shot or killed not including the shooter, counts 268 mass shootings in 2018 so far—but aside from Parkland, you may not have heard much about them. Here’s a running tally of every mass shooting so far this year.

Number of mass shootings in 2018 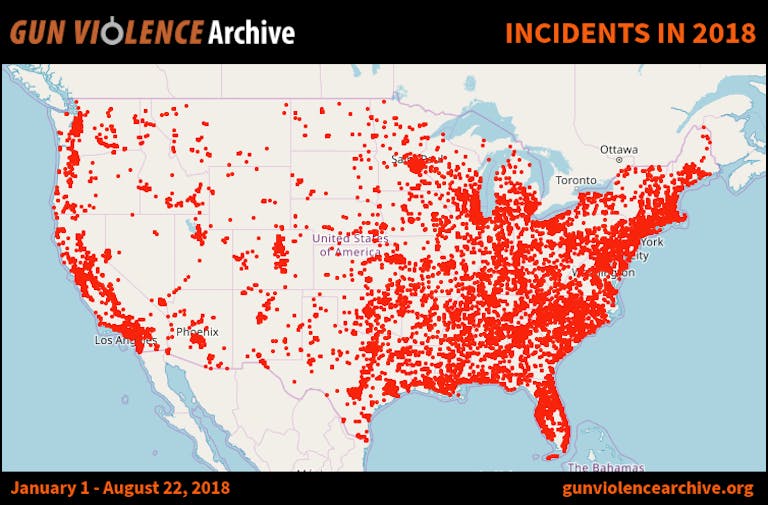 As the mass shooting death toll climbs and news outlets become immune to reporting another deadly incident, more restrictive tallies denote what most Americans are now trained to think of when they define a mass shooting. There are numerous innocent victims, a lone shooter, and a highly visible, presumably safe public setting.

Other tracking resources include the Mass Shooting Tracker, which began as a crowdsourced database on Reddit in 2013. Based on its definition of a mass shooting—any incident in which four or more people are shot, whether or not there were any casualties—the number of mass shootings in 2018 is 332. The site’s tally also includes the death of the shooter and a statement on shooter suicide and motivation:

We do not consider the motive of the shooter, or whether he or she shot up a school, workplace or street corner. Our mission is to record all incidents of mass gun violence. We include the shooter’s death because suicide matters and means matter. Ignoring the shooter’s death is not logically consistent with research that tracks the death toll of firearm suicides in our society.