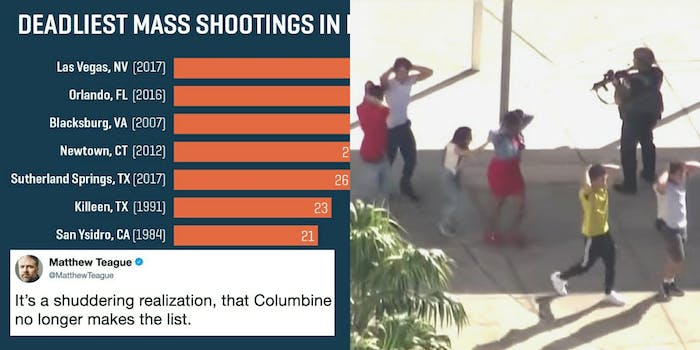 This is how far we've regressed in 19 years.

Students filmed horrific gunfire in the classroom, took photos of their peers crouching near their desks, and posted conversations with loved ones across social media, documenting the deadliest mass shooting this year. Cruz, a former student of the school, has been charged with 17 counts of premeditated murder.

The shooting has become the eighth deadliest in modern U.S. history and the third deadliest mass shooting to happen in the past five months, according to nonprofit gun violence news organization the Trace. On Twitter, Daniel Nass, a visual journalist with the Trace, pointed out this change—and his thinning patience—with a chart he’d updated reflecting the Parkland shooting.

I've updated this @teamtrace graphic three times in the past five months. pic.twitter.com/T7QfqQ9zHn

Being that the shooting took place in a high school with such a high death toll, critics of the latest mass murder made comparisons to the Columbine High School massacre in 1999 carried out by two students, using the first shooting as a measurement of changes and inaction between the two events.

It's been 19 years since Columbine. 5 years since Newtown. The inaction in the wake of these tragedies has gotten us to 18 school shootings in the last 6 weeks. Kids are dying — we can't tolerate politics as usual anymore.

Remember how we were upset for years over 13 dead in Columbine? 17 dead in Florida and its become business as usual in the US.

ive noted this before but after columbine, kids did not know how to speak to the media. now, they all seem to know how to expertly do it and it makes me incredibly sad.

Other countries have a Columbine. Or a Sandy Hook. But they have just 1 and then real change happens. Ask the Australians.

However, one commenter, National Geographic and Los Angeles Times correspondent Matthew Teague, pointed out that, despite our inclination to compare the Parkland shooting to the one that took place at Columbine, the latter is no longer even on the list of the 10 deadliest shootings in modern U.S. history. Columbine’s absence is both a testament to how far worse mass shootings have become over the past two decades and how differently the country has learned to respond to instances of mass murder.

Even worse, it’s actually been five months since the high school shooting was included on the list of “10 deadliest mass shootings“; Columbine, with 13 dead (not including the two gunmen who committed suicide) and 24 injured, broke from the top 10 after Stephen Paddock opened fire on a crowd of 22,000 concertgoers in Las Vegas in October. At the time, Columbine sat at no. 10. But after Las Vegas, it fell to 11, then 12 after the Sutherland Springs church shooting in November, and now, 13 after Parkland’s shooting.

In 1999, the Littleton, Colorado shooting at Columbine High School shook the U.S., becoming an anecdote for the possible results of gun culture, violence in video games and music, and bullying. The shooting was more poignant in how premeditated the two gunmen’s plans were—in their video recordings, and in the calculated manner they shot classmates across the school, and in the explosives they intended to set off in and outside the building.

These themes, too, can already be seen unfolding into the larger narrative of Cruz’s actions—fellow students have so far described him as a loner exhibiting a pattern of violence, who knew how to play the school’s mass shooting drill preparations to his advantage. One even said that he and other students previously joked that if someone at school were to commit a mass shooting, it would have been Cruz.

But what has changed since that day at Columbine 19 years ago is that children being gunned down in school is no longer an outlier incident. It’s something we believed would end after Columbine, after Virginia Tech, and definitely after Sandy Hook, but it hasn’t. Now, we just update charts, check Twitter for videos, and beg for legislators to do more than give thoughts and prayers. Technology may have altered how we gawk and respond and forced the media’s hand on how fast we move on, but it hasn’t helped the lives of these children. What they are left with are images on their phones reminding them of the worst fear they’ve ever felt and the hopelessness that more like them will face the same horror very soon.