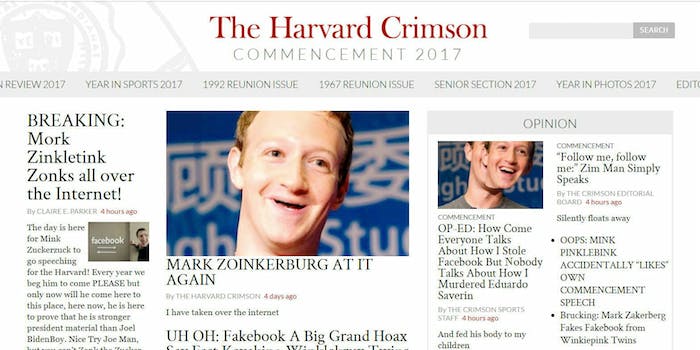 Fingers are being pointed at the Harvard Crimson's long-time satirical rival.

A hacker took over Harvard’s student-run newspaper to troll Mark Zuckerberg minutes before he gave a commencement speech at the university he dropped out of 12 years ago.

The front page of the 144-year-old Harvard Crimson was plastered with fake news articles and disturbing images of Zuckerberg on Thursday morning. Almost every inch of the paper was turned into a pun-filled joke about the Facebook CEO.

Some of the headlines sound like they were crafted by the deft hand of Dr. Seuss: “BREAKING: Mork Zinkletink Zonks all over the Internet!,” “Mark Zoinkerburg at it again!,” and a personal favorite, “OOPS: MINK PINKLEBINK ACCIDENTELY “LIKES” OWN COMMENCEMENT SPEECH.”

The incident now appears to be an ironic lesson in karma. As Business Insider points out, Zuckerberg reportedly hacked the email of two Crimson editors during his sophomore year at the university to preview the newspaper’s take on a legal dispute with founders of rival social network ConnectU.

The front-page hack was first noticed this afternoon, and the stories were taken down soon after. You can see an archived version here.

“Earlier today, The Harvard Crimson‘s website was altered by an unauthorized user,” Crimson President Derek K. Choi told Business Insider. “We are currently working to repair the breach. We regret any inconvenience to our users and look forward to the rest of Commencement.”