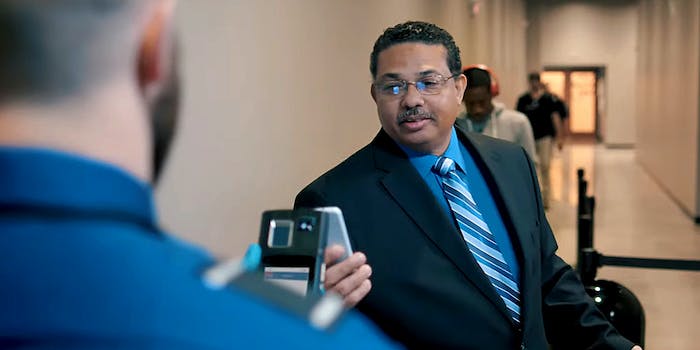 'It’s just a straight path to a train ride to concentration camps.'

Conspiracy theorists are coming out against a proposed expansion to Utah’s digital driver’s license program over claims that it represents the “Mark of the Beast.”

A meeting held by the Utah House committee on Monday was inundated with outraged locals who argued that the legislation, according to the Salt Lake Tribune, was a “slippery slope” towards everything from concentration camps to global domination by the United Nations.

The bill, known as SB88, would expand the use of digital driver’s licenses on smartphones beyond the state’s current pilot program.

Proponents of the bill, such as Sen. Lincoln Fillmore, a Republican representing District 10, attempted to quell the public outcry by arguing that a digital driver’s license was much more secure than a physical copy.

“If you ever lose your driver’s license, anybody who picks it up has access to all the information on there,” Fillmore said. “If you lose your phone, you can have any information wiped remotely.”

Although legitimate concerns about the possibility of a data breach were brought up by at least one former public official, the vast majority of outrage appeared to be linked to far-right conspiracy theories.

One attendee compared the digital driver’s license to the Mark of the Beast, a reference to a biblical prophecy pertaining to the end of the world.

“This feels like you’re moving one step closer to the Mark of the Beast,” the woman said. “The Book of Revelations states we will not be able to buy or sell goods without the mark of the beast.”

Others suggested that the program would undoubtedly usher in mandatory vaccine passports nationwide.

“Vaccine passports are everywhere. Show your papers. Hello, is this America or not?” one man asked. “How dare you propose something that on the path to take away our liberty.”

As is often the case among conspiracy theorists, comparisons were made to Nazi Germany and the Holocaust.

“Everything about a digital driver’s license brings wrong and evil,” another woman said. “It’s just a straight path to a train ride to concentration camps.”

The meeting finally ended with two new amendments to the legislation, one that clarified that participation was completely voluntary and another that noted that the app could not track users.

In the end, the committee declined to take a vote on the bill. Although the legislation could still pass if brought to a vote, it will undoubtedly be met with even more conspiratorial claims of demonic tracking and mass genocide.