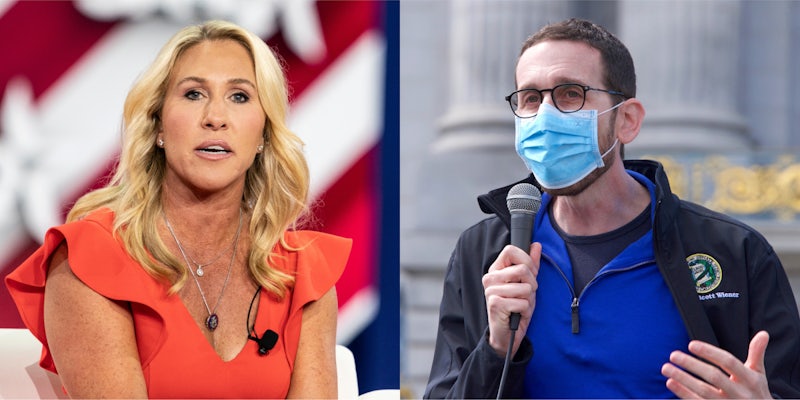 Greene's remarks come after 5 were killed at a gay club over the weekend.

Rep. Marjorie Taylor Greene (R-Georgia) called a gay politician a “groomer” on Tuesday in response to concerns over recent violence aimed at the LGBTQ community.

Following the shooting at a gay club in Colorado over the weekend, where five people were killed, California state Sen. Scott Wiener (D) denounced the use of the word groomer as an anti-LGBTQ slur.

The word ‘groomer’ is categorically an anti-LGBTQ hate word. It’s super homophobic/transphobic,” he said. “It plays into the slander that LGBTQ people are pedophiles. It’s no different than calling someone a fagg*t. If you call someone groomer, you’re inciting violence against LGBTQ people.”

Just two days later, Greene chose to refer to Wiener as exactly that in a quote tweet of his remark.

“Pass my Protect Children’s Innocence Act to stop communist groomers like this from using state government power to take children away from their parents to allow a for-profit medical industry to chop off these confused children’s genitals before they are even old enough to vote,” Greene tweeted.

The Protect Children’s Innocence Act, introduced by Greene in August, would make it a felony to perform any gender-affirming care on a minor, among other restrictions.

In response to Greene, Wiener criticized the legislation as well as the congresswoman’s remarks.

Greene’s response to Wiener was bombarded shortly after by both supporters and critics, further igniting an already contentious issue.

The shooting in Colorado followed other recent anti-LGBTQ violence, such as the firebombing of a donut shop in Oklahoma earlier this month after it hosted a drag-themed art installation.