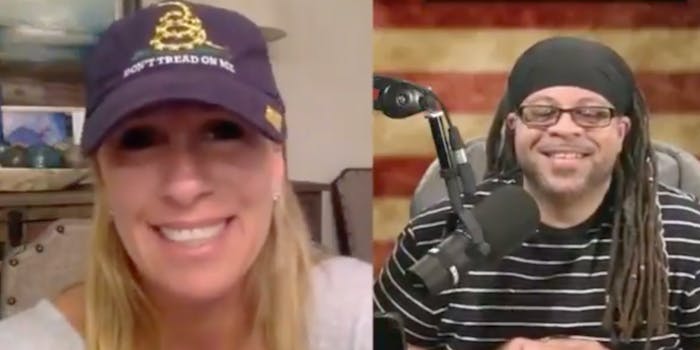 The conspiracy alleges that Ginsburg died while former President Donald Trump was in office but was replaced by a lookalike so that Trump could not fill her seat. Ginsburg, in reality, died in 2020 from cancer complications, leading to the appointment of Justice Amy Coney Barrett—during Trump’s presidency.

About a year-and-a-half prior to Ginsburg’s death, Greene sat down for an interview with Unite America First founder Will Johnson, as first reported by Media Matters. They received a call from a listener who speculated about a photo featuring Ginsburg in Ronald Reagan Washington National Airport. “All of a sudden she’s walking straight upright like it’s a whole new person. Do you believe that is Ruth?” they asked.

Johnson compared the photo to the Hillary Clinton body double conspiracy, which the former secretary of state was subjected to after collapsing during the 2016 election campaign, according to the Independent. Johnson said the person in the photo was “almost like a body double like Hillary Clinton.”

“I do not believe that was Ruth. No. I don’t think so,” Greene added.

“I don’t either,” the caller said, agreeing.

Greene, a supporter of the QAnon conspiracy, has faced fervent backlash for her comments and social media activity that surfaced over the past week. In just a few other revelations that are drawing criticism, Greene harasses a Parkland shooting survivor, discusses forcing Muslim congresswomen to retake their congressional oaths on the Bible instead of the Quran, indicates support for executing prominent Democrats, and spreads conspiracy theories about notable mass shootings.

Greene said in a statement on Friday that the “Democrats and the Fake News media” are attempting to “take (her) out” and asked for campaign donations from supporters. Greene said she has so far raised over $1.6 million as a result of what she described as “smear campaign attacks” against her.