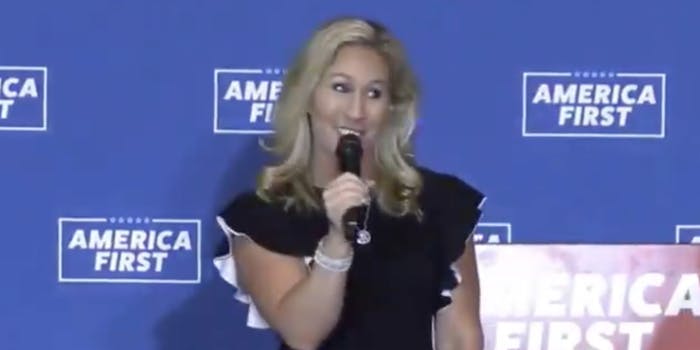 Greene, often referred to as the “QAnon congresswoman” for her promotion of outlandish conspiracy theories, used the accent during a speech on Thursday evening in Dalton, Georgia.

After asserting that the cartels were “making a lot of money off of Biden” in the accent, Greene went on to laugh before acknowledging that the voice was “really bad.”

Many online agreed. Twitter was flooded with remarks about the congresswoman’s bizarre speech.

“So now she thinks she’s a stand up comedian, albeit a very bad one,” @Gigisaythis1 said.

Others argued that Greene’s remarks were outright racist and called on the Republican Party to reign in the congresswoman.

“If you voted for this racist trash heap, shame on you,” @reybango said.

A Georgia Democrat even called on Greene to help her in legalizing marijuana in order to cut off the black market profits that drug cartels rely on.

“Every day this poor excuse for a Congresswoman sinks lower and lower,” Rep. Beth Moore (D-Ga.) said. “Tell ya what, Marj, let’s strike a blow to the cartels together by convincing Biden & Congress to legalize cannabis so the cartels can’t profit from the black market.”

The footage comes just days after Greene found herself embroiled in controversy yet again over her comparisons of mask mandates and the Holocaust.