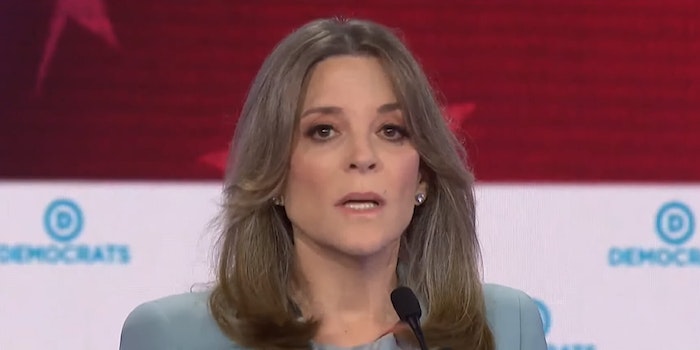 Marianne Williamson’s old tweets are the ultimate ‘it me’

Some old tweets are getting new life after her debate performance.

Author and spirituality guru Marianne Williamson caught a lot of attention after her performance during yesterday’s second part of the first 2020 Democratic presidential primary debates.

Her debate was, well, unique. She decided to say she would call New Zealand as her first act as president, which obviously caught people’s eye—as did her closing statement.

She even was the top-searched Democratic candidate competing in the second round of the debate on Google.

But that interest has switched into mining her Twitter account, which boasts 2,650,000 followers, where people have unearthed a number of tweets that have become jokes on Twitter.

Some people just decided to meme the tweets.

I started replacing Matthew McConaughey subtitles with Marianne Williamson quotes and I honestly can’t tell anymore who said what. pic.twitter.com/xxk5fq13N2

While other old tweets took a life of their own.

Like this one, where Williamson said: “each of us is pregnant with a better version of ourselves.”

TBH I thought it was just all the pizza I ate yesterday https://t.co/JtlHenFBh0

Or this one, where Williamson writes that “You’re a lamp; God is the electricity.”

Williamson has a plan for EVERYTHING https://t.co/zvZyJviUiO

look lady am I a lamp or a faucet or a goddamn human https://t.co/vpBhyq43Vo

This one, where the 2020 Democratic hopeful says if you’re missing someone it means that “on a soul level they’ve come to visit.”

I doubt Barack Obama even knows who I am. https://t.co/GnfNSijiFB

There are plenty more floating around on Twitter, with people cracking jokes.

But, to be fair, there were also a decent amount of people on Twitter who also found the tweets inspiring, or at the very least thought it would be intriguing to have someone like Williamson in the White House.