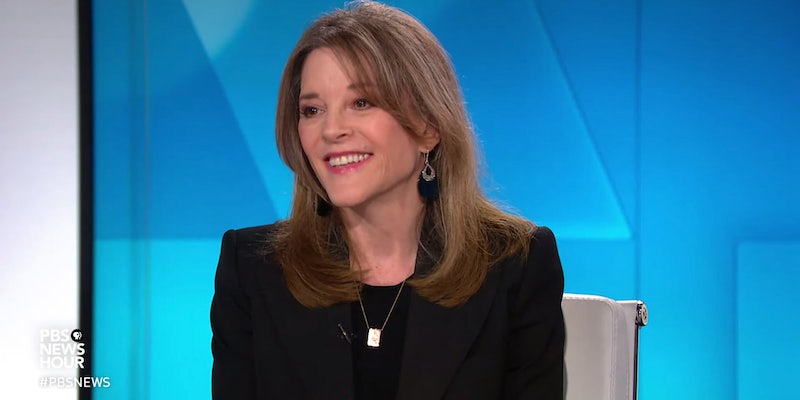 After reading Williamson's best-selling book, Oprah Winfrey claimed to have experienced 157 miracles as a direct result.

Marianne Williamson is a self-help guru, spiritual advisor, and author of A Return To Love, a book that was featured on The Oprah Winfrey Show in 1992. Oprah later claimed that reading the book helped her experience 157 unique miracles.

And now, Williamson is also one of the twenty people officially qualified to participate in the first Democratic primary debate.

On Thursday, the Democratic National Committee released a list of the twenty candidates who had qualified for the first primary debates taking place on June 26 and 27 at the Adrienne Arsht Center for the Performing Arts in Miami.

Presidential candidates who will take the stage at the first primary debates on June 26 & 27:

Along with the omission of former Alaskan senator Mike Gravel, one of the biggest surprises on the list for anybody who doesn’t have their eyes glued to the 2020 race, is Marianne Williamson’s inclusion. Williamson cleared both the hurdles for polling and fundraising by securing at least 1 percent support in three qualifying polls and accruing 65,000 unique donors from at least 20 states.

Williamson caught national attention a few months ago based on her comments on reparations. Williamson said that part of her platform included setting aside at least $100 billion for a reparations program that would play out over the course of a decade.

Her platform includes a proposal for free public college, support for Medicare For All and the Green New Deal, and $10 billion per year for slavery reparations to be paid over the course of a decade.

“I believe $100 billion given to a council to apply this money to economic projects and educational projects of renewal for that population is simply a debt to be paid,” Williamson told CNN back in January.

Williamson’s calls for spirituality and a moral awakening have struck a chord with online pundits. Although Williamson touts a very progressive platform, her meme potential—similar to that of Andrew Yang’s or Gravel’s—is another factor attracting support to this unlikely candidate.

Leftist podcast Chapo Trap House has recently attached itself to Marianne Williamson’s mentality of good vibes and spirituality. Hosts and fans of the show have taken to using the hashtag #ORBGANG on Twitter to signal somewhat tongue-in-cheek support for Williamson.

Jokes aside, after the DNC’s official confirmation of candidates for the first debate, it seems that the larger American public will come to be familiar with Marianne Williamson’s very progressive agenda and her very good vibes.