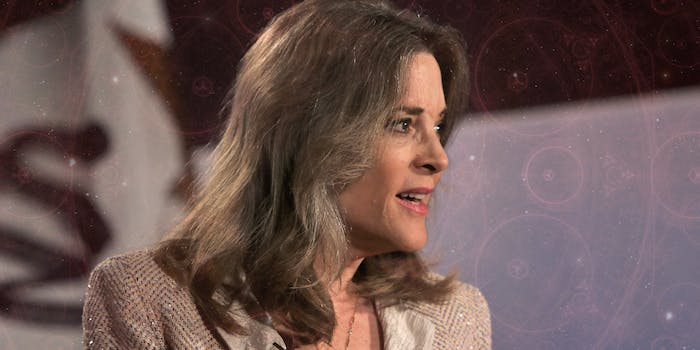 When people are laughing, they aren't seeing the danger.

Not everyone is charmed by Marianne Williamson’s insurgent, self-help candidacy.

Both skeptics and supporters alike are enamored with Williamson’s longshot bid for the Democratic presidential nomination,  from her quirky stances to her passionate deliveries. And although her polling remains low, she’s been the subject of social media adoration after each of her debate performances, even from credible journalists.

This time out, memorable lines like referring to American racism as a “dark psychic force” prompted some journalists to write half-jokingly that she “won the debate.”

Though many Americans are just now learning about Williamson for the first time, she enjoyed a long career as an author, spiritualist, and self-help guru to the stars, where she promoted questionable and even dangerous scientific, or pseudoscientific, ideas.

Those are beginning to get attention in the media, but one group has already been delivering sharp rebukes: disability advocates.

#CripTheVote is an online effort to hold Williamson accountable. The movement, which is nonpartisan, works to engage disabled people on “policies and practices important to the disability community.”

When disability activists saw Williamson’s warm debate reception Tuesday night, they set to work reminding the world of her past actions regarding the AIDS crisis and her stance towards medicine, illness, and disabilities.

If you ever read an article saying that I told people with AIDS they didn't have to take their medicine because positive thinking would cure it; or that I ever told people who got sick that negative thinking caused it; please know both those things are complete and utter lies.

Alice Wong, Andrew Pulrang, and Gregg Beretan, who started the hashtag, are profoundly concerned that the public can so blithely enjoy Williamson on the stage.

“I object to her view that sickness, illness, and disability is an illusion that can be ‘wished’ away by positive-thinking,” says Wong. “No amount of prayer or forgiveness by me will ever help me walk again. Her anti-science beliefs harm millions of people with depression, other mental health disabilities, or HIV/AIDS that take medications and other treatments in order to survive.”

Willamson came to prominence after Oprah championed her 1992 book A Return to Love: Reflections on the Principles of A Course in Miracles, a reinterpretation of the 1960s new-age hit A Course in Miracles by Helen Shuchman. A Return to Love launched Williamson to self-help stardom. At the height of her fame, she received a Los Angeles Times profile that branded her a guru to the stars.

A Course in Miracles and A Return to Love contain a healthy mix of pseudoscience and new-age philosophy, but the most destructive idea in activists’ eyes is that both Shuchman and Williamson believe the world is an illusion, and so sickness and pain are also illusions. Only love is “real.” Illness, disease, and disabilities aren’t.

In the book, Williamson details how she facilitated bizarre dialogues between AIDS patients and “their disease.” In one passage, “the virus” responds, “If I was, as they say, ‘out to get you,’ don’t you think you’d be dead by now? I’m not able to kill, harm, or make you sick. You give me the power you should give to God.”

In the Times cover story, the reporter watched Williamson tell a support group with the HIV virus, “your soul is not sick.”

Williamson founded the Los Angeles Center for Living, an organization that purported to focus on healing patients with terminal illnesses including AIDS. Her co-founder, Louise Hay, claimed to have cured her cervical cancer through alternative healing.

“I think disabled people, especially activists, actually have less fear of the outright bullies everyone can see, than we have for the harm that comes unintentionally from ‘kind’ people who are supposed to be our allies. And Marianne Williamson kind of fits that,” said Andrew Pulrang.

Activists say Williamson had a direct hand in directing AIDS patients away from proper treatment and towards prayer and meditation.

Given her biography, it seems they have a point.

I worked in HIV starting in 1989. I ran the Southern CA AIDS Hotline in the 90s. The number of people who were convinced by her & Louise Hay that their illness was the dis-ease from their own internalized whatever caused more people to die blaming themselves than I can count.

It isn’t just the AIDS crisis that Williamson met with her brand of spirituality.

Activists who spoke with the Daily Dot pointed to previous statements Williamson has made about vaccines, antidepressants, and other scientifically proven forms of medical treatment.

One particular detail that came up repeatedly was Williamson’s tweet on the 29th anniversary of the ADA that praised Opportunity Village, a sheltered workshop where disabled people work in a segregated environment and are paid below the minimum wage.

Today is the 29th anniversary of the Americans with Disabilities Act. I have found, visiting such places as the Center for the Blind & Opportunity Village (for the intellectually impaired) in Las Vegas, NV, that… https://t.co/4i3aWw4xH9

This is a sheltered workshop. Sheltered workshops pay disabled people well below minimum wage in segregation. There’s federal legislation that just passed the House to outlaw subminimum wage. It’s not impossible for it to pass in the Senate.

How are you this clueless?

Disability activist Sarah Blahovec adds, “I have a life-threatening chronic illness that is incurable and mental health conditions. I’ve been approached by people who talk of faith healing and downplay the importance of medical science in my well-being, and people who try to convince me that essential oils or energy healing can treat a condition that I’m getting organ surgery for next week and had to tediously manage with a variety of medications for over a decade … I draw a line when someone uses their influence to convince others that alternative or spiritual healing is more important than medical treatment.”

The #CripTheVote hashtag doesn’t just want to shine a light on Williamson. They want to use her bad examples to talk about what they want to see in a presidential candidate.

Disability activist Neal Carter says that a presidential candidate should be “willing to bring disabled people to the table and make sure [the table] is accessible.”

Willamson’s past has provided an opportunity for disability activists like Wong and the other leaders of #CripTheVote to expand the dialogue around the disability community and disability policy.

However, its leaders stress that their hashtag was here long before Williamson came back to public prominence and they plan to be around long after.

“I’m humbled by the breadth of knowledge and wisdom our participants frequently share on policy, politics, and disability issues,” said Wong. “I feel that politicization starts when you realize you’re part of a larger community and movement and it’s my hope that #CripTheVote encourages disabled people to express themselves and find power in one another.”