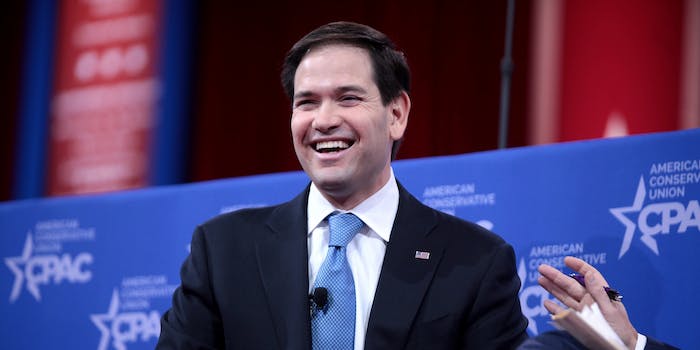 Grown man Sen. Marco Rubio (R-Fla.) on Monday launched a Snapchat account that all but shouted his intention to formally launch a campaign to be the 2016 Republican presidential nominee.

I'm now on @Snapchat. My username is marcorubio16. Please add me.

Rubio is scheduled to announce on Monday at 6pm ET that he is running for president, joining a GOP field that already includes fellow Sens. Ted Cruz (R-Texas) and Rand Paul (R-Ky.). (He already announced his 2016 bid to top donors.) But until then, Rubio is tweeting hourly reminders of his announcement event and asking people to add him on Snapchat.

Daily Dot staff writer Marisa Kabas has added Sen. Rubio and snapped him a request for comment on his Twitter slogan, “#newamericancentury.”

hi @marcorubio are you team follow back or what pic.twitter.com/l2KzeLAp35

We’ll of course update with any zany emoticons we receive.

… I announce my candidacy for President of the United States of America.