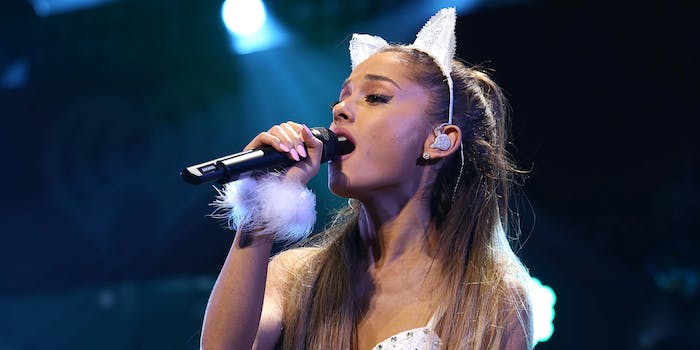 The improvised device appears to have contained nails and bolts.

British law enforcement arrested a 23-year-old man on Tuesday morning in connection with the attack at an Ariana Grande’s concert in Manchester, England, on Monday night, just hours after confirming that the blast was a suicide bombing.

With regards to last night’s incident at the Manchester arena, we can confirm we have arrested a 23-year-old man in South Manchester.

At least 22 people are now confirmed dead and 59 injured, many of them children and teenagers. Police had been aiming to establish whether the perpetrator had acted alone or as part of a network.

“The attacker, I can confirm, died at the arena,” Greater Manchester police Chief Constable Ian Hopkins said in a statement issued early Tuesday. “We believe the attacker was carrying an improvised explosive device, which he detonated, causing this atrocity.”

According to SITE Intelligence Group, a U.S.-based private intelligence group that monitors foreign communication channels, the Islamic State is claiming responsibility for the attack.

The horrific blast ripped through the foyer of the Manchester Arena venue at around 10:35pm local time, to devastating effect, as concert attendees prepared to filter out of the facility. Those inside the concert hall described how, startled by the muffled explosion, confusion gave way to panic as thousands fled the arena.

As emergency service crews and ambulances attended to the scene, medics described how many of the wounds were consistent with shrapnel injuries. One witness, speaking to the Guardian, described how nuts and bolts were scattered across the foyer floor—now suspected to have been released by the homemade device.

“We ran and people were screaming around us and pushing on the stairs to go outside and people were falling down, girls were crying, and we saw these women being treated by paramedics having open wounds on their legs … it was just chaos,” Sebastian Diaz, a 19-year-old attendee, told Reuters.

In the hours following, many desperate and distressed parents and siblings have taken to social media to try and find their family members. In an attempt to connect families with missing loved ones, police set up an emergency phone line.

Police have set-up an emergency phone number for people worried about family + friends after the Manchester explosion. It's: 0161 856 9400.

As the details of the incident emerged, officials have asked that social media users refrain from posting graphic imagery of victims from the scene.

Don't share pictures or video of the #manchesterexplosion on social media. Please show respect to victims and their families https://t.co/GnPNiakcNs

In all, the overnight operation involved over 400 police officers and sixty ambulances, taking victims to six hospitals across the city. A “fast-moving investigation” is now currently underway, involving counter-terrorism units and British intelligence, MI5.

The terrorist attack prompted a morning meeting of Britain’s Cobra government emergency committee, led by Prime Minster Theresa May, who condemned the attack as “appalling, sickening cowardice” against “defenseless children.”

Home Secretary Amber Rudd also spoke out against the “barbaric attack, deliberately targeting some of the most vulnerable.”

The suicide bombing comes just weeks ahead of the British parliamentary election, but political parties have suspended their campaigning.

Amidst the devastation, stories are emerging of how the citizens of Manchester have rallied together. One report emerged telling how a middle-aged woman named Paula Robinson, waiting on a train at the station next to the venue, led over 50 fleeing and panic-stricken teenagers to the safety of a local hotel where they now await their parents.

Other businesses and bars in the vicinity offered their facilities as refuge for fans to stay as the police operation unfolded. The National Health Service’s Blood and Transplant Service has also reported an overwhelming response by the public, eager to contribute, while local cafes and restaurants have also offered free food and hot drinks to help emergency services keep strength.

On a grim day for Manchester… all around there's humanity and kindness pic.twitter.com/w3G7cTApB4

Police have not disclosed any additional details about the suspect arrested.

UPDATE 8:27am CT, May 23: The suicide bomber has been identified as 22-year-old Salman Abedi, CBS reports. He was allegedly known to British authorities prior to the attack.

Clarification: The woman who accompanied fleeing teenagers may have identified the wrong hotel in her Facebook post about the incident. We have removed the name of the hotel she cited after the company refuted that detail. Further, police now say the suspected attack is 22 years old.