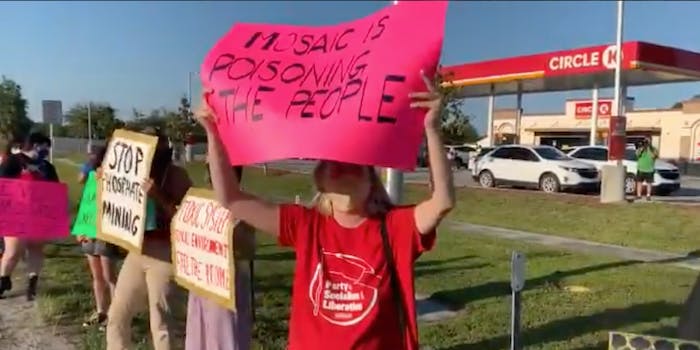 'What is happening in Manatee County, FL right now is horrifying.'

Activists online continue to be horrified by the handling of a wastewater disaster in Florida—first, at the lack of protection for inmates near the disaster and, now, because of the potential environmental impacts.

A state of emergency was declared in Florida Saturday after a leak at a large pond of wastewater threatened to flood roads and burst a system that stores polluted waters, reported ABC7. The Florida Department of Environmental Protection said the pond holds millions of gallons of water containing phosphorus and nitrogen from an old phosphate plant.

Locals and online activists are reacting strongly against the decisions of local officials, sparking protests in the area.

Nikki Fried, Florida’s Commissioner of Agriculture and Consumer Services, said “what’s happening at #PineyPoint right now is a result of decades of ignoring science and scientists.”

Earlier in the week, activists and others online were horrified by the lack of protection local inmates faced during Manatee County’s “mandatory evacuation.”

Despite a mandatory evacuation order, the inmates remained mostly stagnant as the threat of flood from a wastewater pond looms.

Over 300 homes in the area were evacuated, while a nearby highway was closed. Manatee County Central Jail, however, had no plans to evacuate prisoners, according to a press conference held Sunday.

During the conference, Manatee County Administrator Dr. Scott Hopes said the jail would take prisoners to the second floor if necessary.

Creative Loafing: Tampa Bay reported that by Sunday night, the jail seemingly shifted course, evacuating only the 345 inmates on the jail’s first floor. According to Tampa Bay Times, 1,063 inmates are at the jail.