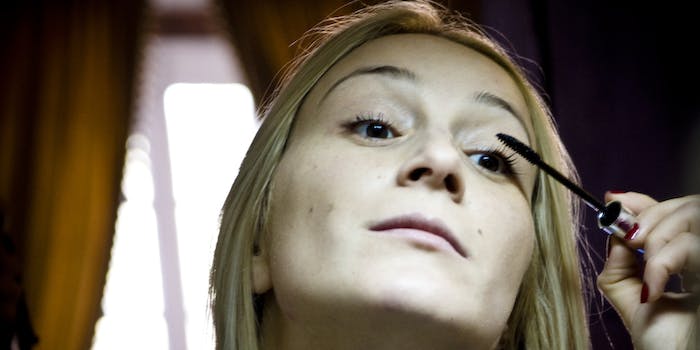 L’Oreal is giving us Makeup Genius, a virtual makeup app

So you can try on that berry lip tint in the privacy of your own home.

If you were a girl growing up in the 90s, you probably had that Barbie makeover CD-Rom where you spent hours making Barbie model different kinds of lipstick and eyeshadow. Mine always had frosted pink lips and blue eyeshadow, so she looked like a middle-aged ex-heroin addict who had gotten her life back together and started selling magazine subscriptions door-to-door. Sorry, Barbie.

Now, one makeup company is releasing a grown-up version of that Barbie makeover CD-Rom, except this time it’s you trying on the makeup, not Barbie. L’Oreal just announced the launch of Makeup Genius, an app that turns your front-facing iPhone and iPad camera into a virtual makeup mirror.

Created by the facial mapping tech firm Image Metrics—they’re the folks responsible for making Brad Pitt look like a terrifying baby-man in The Curious Case of Benjamin Button—Makeup Genius lets you try on more than 300 different cosmetic products by mapping out 64 points on your face to identify your skin tone and features. You can also try on 16 different custom “looks,” such as a smokey eye or the aforementioned middle-aged ex-meth addict motif (Just kidding, I think).

Although there are a handful of different virtual makeup mirror and retouching apps on the market, like Perfect 365 and Visage Lab, the cool thing about Makeup Genius is how well it replicates the actual experience of trying on makeup at a department store counter: The makeup stays on with you if you move your head or walk around, and it also works in various different lighting conditions.

Unfortunately, Makeup Genius doesn’t yet include an in-app purchasing feature, so you actually have to do a bit of legwork to track down and buy the products you try on. (It’ll also only be available for iOS for the time being: Sorry, Android users). But if you’re a makeup junkie who’d prefer not to schlep over to Sephora and fight with tweens over who’s next in line to use that berry lip tint tester, Makeup Genius is probably the app for you. You’ll have to wait a bit to get your hands on it, though: The app will be made available for download in June.