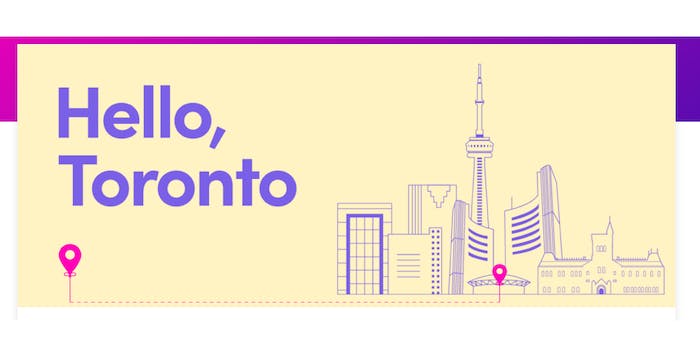 Lyft is going to Canada in its first international launch

Lyft is headed north of the border.

In its first international launch, Lyft is heading north of the border. Those looking for an Uber alternative in Toronto, you finally have one.

Lyft announced the new locale in a blog post Monday morning. Toronto Lyft riders will be able to enjoy the new service before the year’s end. And it’s about time: Lyft says more than 50,000 Toronto residents have downloaded the app to date.

Up until now, Lyft has been U.S.-only, so this Toronto launch is a big move for the ride-hailing company. Lyft, which first debuted in 2012, has taken its expansion at a slightly slower pace than its main competitor, Uber. As of February, Lyft had a presence in 300 cities. Uber, by comparison, was in more than 450 cities across the globe at the time. Uber, which debuted in San Francisco in 2010, first made its international debut in Paris only a year later in 2011. Now Uber has a presence in 77 countries.

With Uber in hot water over sexual harassment allegations, shady business practices, and internal upheaval, Lyft has emerged as its less evil alternative (particularly after the #DeleteUber campaign gained traction earlier this year).

When Lyft officially debuts in Toronto, residents should see similar wait times (two to three minutes) as you would in other cities in the U.S.