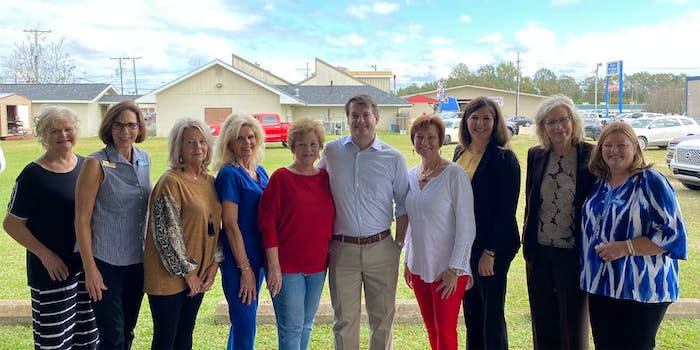 Luke Letlow, elected to represent Louisiana’s 5th Congressional District in a runoff election earlier this month, died of COVID-19 complications in a Shreveport hospital Tuesday night. Letlow, 41, is survived by his wife and two children, and while a number of people are mourning him today, a number of people are also going online to post photos of maskless campaign events leading up to Letlow’s Dec. 18 diagnosis.

Letlow’s own Twitter account places him on the “open the economy” side of the ongoing national debate that creates a binary between guidelines that seek to limit people’s exposure to COVID-19 and a more laissez-faire approach to a pandemic that has left nearly 340,000 Americans dead in nine months.

Letlow featured himself in an Oct. 8 tweet at a campaign forum, saying, “So while we’ve been cautious and I think both the state and federal level have taken numerous precautions for COVID-19. We’re now at a place if we do not open our economy we’re in real danger.”

Letlow’s own Twitter account shows multiple examples of the aspiring congressman gathering sans masks with supporters throughout his campaign.

His Facebook is also a testament to how his personal choices might have put him at greater risk for contracting coronavirus, including documentation of a Dec. 2 meet-and-greet event where he and some of his supporters are indoors and maskless together.

He even showed himself voting maskless in a Facebook post for the Dec. 5 runoff against another Republican candidate.

Some took to Twitter to drive the point home in a week in which the U.S. is experiencing record hospitalizations and is anticipating a new post-Christmas surge of COVID-19 cases.

One person, sharing the Dec. 2 Facebook photos, observed, “Letlow held unmasked, indoor events in the middle of a pandemic. He’s lucky if the only death he causes is his own.”

Another attempted a take on the “how it started” meme.

Others gathered additional Letlow-and-supporters-sans-masks photos to share on Twitter. One assessed Letlow’s attitude toward his supporters by surmising, “He didn’t care about them enough to wear a mask in circumstances that clearly warranted it.”

Another responded to a more reflective Letlow tweet from Dec. 21, in which the congressman-elect thanked supporters for their prayers and expressed optimism regarding his recovery.

In the tweet, he said, “Thank you for the continued outpouring of prayers and support for my family and me. I am currently undergoing treatment for COVID-19 at St. Francis Hospital by a wonderful team of doctors and nurses. I am confident that with their help that I will be on the mend soon.”

Someone using the nom de tweet “Truth Integrity Logic” chided, “I bet that wonderful team of doctors and nurses wishes you had worn a mask and didn’t encourage others to also go maskess. Now, that wonderful team is endangering their own lives trying to save yours because you wouldn’t take precautions.”

Author Kurt Eichenwald characterized Letlow as someone who “set an example by wearing masks in a community that mostly refused,” but respondents shared additional photos to contradict Eichenwald’s assertion.

Indeed, there is a photo montage from Letlow’s Twitter account on Dec. 1 that shows him masked in three of four photos—but not the fourth.

Letlow’s last personal post to both Twitter and Facebook came on Dec. 21, calling the rare convergence of Jupiter and Saturn, which some theorize as the astronomical source of the Christmas star, as “a beautiful reminder that Christ came to give all of us hope!”

An official statement was posted to both platforms on Dec. 23 noting that Letlow was being moved to Shreveport’s Ochsner LSU Academic Medical Center from Monroe’s St. Francis Hospital to continue his treatment. On Dec. 27, his wife Julia posted a progress update, noting, “While Luke continues his treatment and remains in stable condition, the doctors have told us the road to recovery and the length of time is hard to predict and different for everyone.”

According to the New York Times, Letlow is the first elected federal official to die from coronavirus.