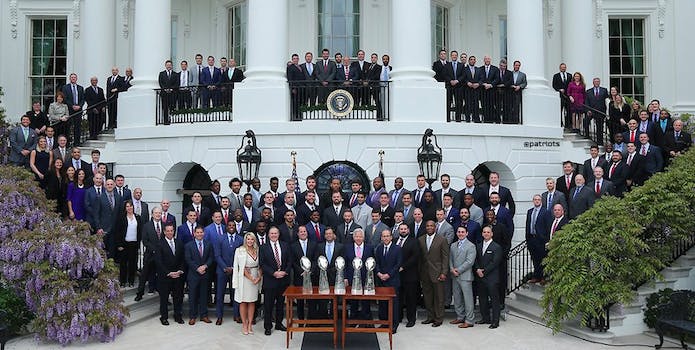 Only 34 New England Patriots showed up to meet Trump

Well this is awkward.

Only 34 New England Patriots players showed up to celebrate their Super Bowl championship on the south lawn of the White House on Wednesday.

President Donald Trump called out members of the Patriots to recognize them for their win, only to have several dozen missing including quarterback Tom Brady.

Among some of the missing team members were Danny Amendola, Chris Long, Alan Branch, Martellus Bennett, and Devin McCourty.

In an interview with Time magazine safety Devin McCourty had previously said he was not going to the ceremony because he didn’t feel accepted in the White House. “With the president having so many strong opinions and prejudices, I believe certain people might feel accepted there while others won’t,” he said.

Despite the low turnout, the Patriots have ties with the Trump administration as owner Robert K. Kraft donated $1 million to inauguration festivities.

“No team has been this good for this long,” Trump said during the ceremony on Wednesday.

The Patriots presented Trump with a helmet and a ceremonial jersey, No, 45 with his name imprinted on it.

The White House visit took place the same day that Aaron Hernandez, former Patriot, hanged himself while serving a life sentence for murder.