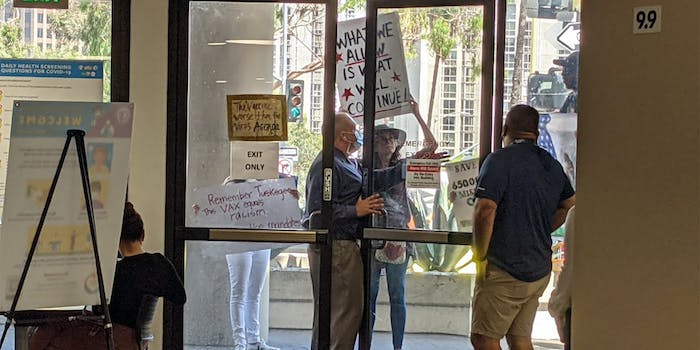 It was a contentious scene.

The resolution passed unanimously. But the scene inside and outside was anything but a show of unity.

Instead, the divide within America as it grapples with fighting COVID, was on full display.

The school board agreed together on its decision. Though some parents expressed skepticism and concern about the vaccine, that came in a mostly civil and orderly manner, as they called into the hearing due to pandemic restrictions.

Outside, another type of scene unfolded.

A crowd of about 50 protestors gathered. It was a motley bunch, including a right-wing extremist who previously punched a breast cancer patient at an anti-vaccine protest, another extremist arrested by the FBI last November for threatening to shoot up a school if Joe Biden won the presidential election, and at least one Capitol insurrectionist. Together, the group tried to sow chaos.

They screamed that LAUSD board members were “Nazis” as they stood directly in front of the building. Some held signs warning against the dangers of vaccines and others chanted QAnon-style slogans.

Journalists, who checked in around an hour before the meeting began, were escorted by security. Though everything appeared normal at first, as the protestors became increasingly agitated, the building was locked down.

Protestors pounded on the glass as the hearing went on. Unable to attend the meeting, they still tried to cause a ruckus. The protesters went after nearly everyone, including at one point when a priest was harassed by the crowd.

Chants of “Nazi school board” filled the air. “Nazi” is becoming a well-worn phrase at extremist rallies in Southern California—as far-right extremists believe those who are pushing for COVID protocols are enacting a fascist agenda.

Protesters there also chanted “Save The Children.” While ostensibly about the vaccine mandate, the phrase has been associated with QAnon, a right-wing extremist movement that believes former President Donald J. Trump is fighting a secret war against Democrats and Hollywood pedophiles. The QAnon movement and the anti-vax, anti-lockdown movement developed a strong synergy in 2020, with many overlapping beliefs.

Extremists also carried the Betsy Ross flag, which has become a symbol of far-right movements across the nation.

After the vote, protestors harassed anyone driving out of the LAUSD garage:

Journalists, including a Daily Dot reporter, exited through an unmarked garage to avoid the crowd. Students in Los Angeles are required now to get their first doses before Nov. 21.