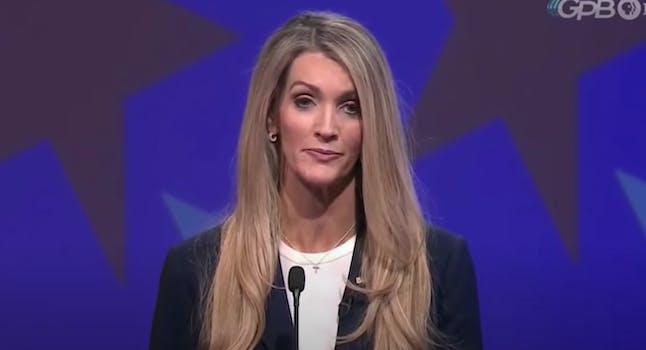 Loeffler is not welcome on Parler.

Sen. Kelly Loeffler (R-Ga.) is getting heat for a Parler post that asks for campaign donations. And the criticism is coming from her own party.

Parler is a social media platform purportedly free of censorship and filled with right-wing conspiracists and President Donald Trump supporters. As the Senate runoff elections in Georgia approaches, Loeffler posted to her Parler page requesting last-minute donations. Users from the far-right accuse her of not being Republican enough.

“DEADLINE ALERT. December 15th is our LAST mid-month deadline before the runoff election, and we’re not on track to hit our goal. Chip in RIGHT NOW to save America from a socialist takeover,” Loeffler posted with a link to donate.

The post did not sit well with far-right Parler users.

“Kelly Loeffler is trying to raise money on Parler and she is going through some things,” someone tweeted with screenshots from Parler.

Many comments call Loeffler a “rhino” or “RINO,” which is a term right-wingers use for Republicans that are not conservative enough, standing for “Republican in name only.” Trump frequently uses the term, most recently to describe GOP members that do not support his election fraud effort efforts, which includes Georgia’s Secretary of State.

“Georgia Lt. Governor @GeoffDuncanGA is a RINO Never Trumper who got himself elected as LG by falsely claiming to be “pro-Trump”. Too dumb or corrupt to recognize massive evidence of fraud in GA & should be replaced! We need every great Georgian to call him out! #SpecialSession!” Trump tweeted.

“Still begging for money I see. Why don’t you use some of that corrupt New York stock exchange money to fund your own campaign. Or what about those insider gains you made while in OUR Senate seat?” one user wrote. “Stop holding your hand out to ask US to finance OUR Georgia Senate seat you bought from Traitor Kemp and took away from Doug Collins.”

“Have Soros pay — we know you are his plant! You sunk The President – GFY #RINO” another commented.

“Go beg somewhere else! We know you are the reason Trump lost! I’ll be writing him in unless you get him re-elected!” someone else posted.

“Isn’t she a blonde, RINO version of Nancy Pelosi? Looking down on all us peasants, from on high,” another user commented.

Loeffler is running against Democrat nominee Reverend Raphael Warnock in the runoff on Jan. 5. Early voting begins on Dec. 14.