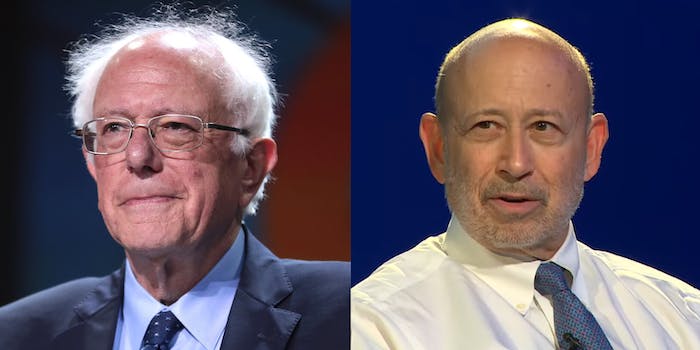 So much so that he said he “might find it harder” to vote for the Vermont senator than President Donald Trump should they face off against one another in the 2020 election.

Blankfein admitted his potential voting preference in an interview with the Financial Times published on Friday.

“I think I might find it harder to vote for Bernie than for Trump,” Blankfein, who has previously made his concerns about Sanders known, told the news outlet. “There’s a long time between now and then. The Democrats would be working very hard to find someone who is as divisive as Trump. But with Bernie they would have succeeded.”

Blankfein, who calls himself a Democrat in the interview, continued when pressed about Sanders’s plan for a wealth tax on billionaires.

“I don’t like that at all. I don’t like assassination by categorization. I think it’s unAmerican. I find that destructive and intemperate. I find that just as subversive of the American character as someone like Trump who denigrates groups of people who he has never met. At least Trump cares about the economy.”

This isn’t the first time Blankfein has made his feelings public about a potential Sanders presidency.

Shortly after Sanders won the New Hampshire primary, the former Goldman Sachs CEO said that he would “ruin our economy,” and called him “just as polarizing as Trump” in a tweet.

Blankfein’s “ruin our economy” comment sparked a number of people online to remind him that he was the head of a major investment bank amid the financial crisis.