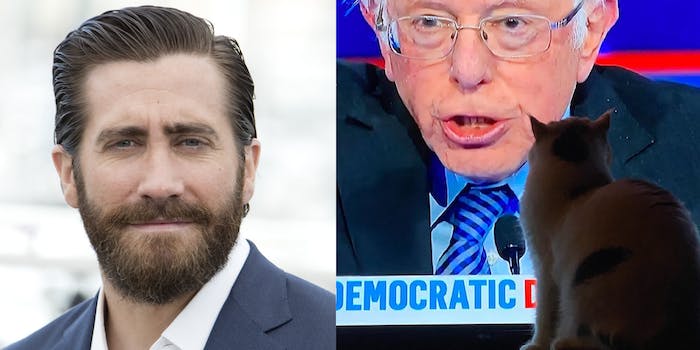 Did Jake Gyllenhaal endorse Bernie Sanders through his cat’s Instagram?

Wait... is Jake Gyllenhaal a furry?

Jake Gyllenhaal has officially thrown in for Bernie.

Or, his cat has at least.

A simple update appeared on an Instagram profile belonging to Ms. Fluffle Stilt Skin, a white cat with brown and grey spotting. The update contained a photo of the cat in front of a television with Bernie Sanders’ face on it. The caption for the video merely reads “I’m feline this guy,” but people have taken it as an official endorsement from the 39-year-old actor. But does the cat even belong to Gyllenhaal?

There has been a discussion over who actually owns Ms. Fluffle Stilt Skin for some time now. Gyllenhaal has never expressly fessed up to owning the furry beauty, but rumors have abounded ever since the Instagram account first cropped up. More than one internet sleuth has attempted to solve the mystery, but no concrete confirmation has arisen.

Despite the lack of hard evidence, the internet-at-large has decided that Gyllenhaal is, in fact, Ms. Fluffle Stilt Skin’s owner. As soon as the subtle endorsement cropped up, people were all over it. “What a time to be alive,” one commenter wrote.

Soon, disbelievers joined the conversation. They flooded the post, slamming the idea that good Ms. Fluffle belongs to Gyllenhaal. “Real Jake Gyllenhaal stans know this is NOT his cat nor his account,” one person wrote.

While most everyone dissolved into an argument over who shares a home with Ms. Fluffle, the rest of the internet was fixated on several comments made on the post. Lines like “I’m a furry Bernie” and “furries for Bernie” immediately caught the attention of some. “Jake Gyllenhaal actually typed out ‘furries for Bernie,'” one person wrote.

And so we are left with perhaps more questions than we had at the start. Who does Ms. Fluffle Stilt Skin actually belong to? Was she endorsing Bernie, or was it actually her mysterious owner? Which candidate does Gyllenhaal support, and will we ever know his cat-status for certain?

And, perhaps most importantly, is Gyllenhaal actually a furry?

The world wants to know.