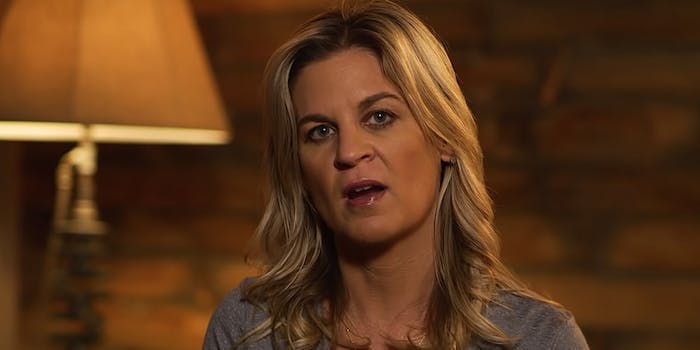 She has a theory for everything.

Over the last decade, an industry of so-called “independent researchers” has been responsible for pushing some of the biggest and most popular conspiracy theories that have crossed over into the mainstream. High up on that list is Liz Crokin.

Crokin is at the forefront of figureheads who, taking their inspiration from media figures like Alex Jones, have established robust social media presences, published books, launched successful YouTube channels, and even made full-length documentaries catering to the small but lucrative niche of people who believe pretty much every conspiracy theory out there.

This is a world of quasi-journalism where attempts at investigation go hand-in-hand with hysterical conspiracy theories and smear attempts. It’s a world where Crokin has done very well.

She is a name that comes up in relation to everything from sex trafficking conspiracy theories to the downfall of Harvey Weinstein to coronavirus being a Bill Gates-sponsored genocide.

And Crokin has leveraged her actual experience as a newspaper columnist into a career as a kind of subject matter expert in the sexual perversions of the elite.

As such, she’s got a successful YouTube channel, written a novel, and most recently appeared in the viral QAnon documentary “Out of Shadows.”

But is Crokin a trustworthy figure trying to bring the powerful to account? Or is she the “queen of Pizzagate,” who thinks Hillary Clinton cursed her into losing her fingers in an accident, and who has a habit of spreading potential libelous rumors about celebrities?

A native of wealthy Chicago suburb Winnetka, Liz Crokin broke into journalism with the Chicago Tribune in the early aughts and spent seven years writing a celebrity gossip column for the Tribune’s now-defunct daily tabloid RedEye. She was let go from the Tribune in 2010, and moved to Los Angeles, when she continued on the celebrity gossip beat, specializing in breaking stories about high-profile breakups.

After a few years in LA, she had significant health problems, including a bout of meningitis which she claims left her unable to work and with lasting brain damage.

At some point, Crokin claims her brain “healed itself,” after which she published a novel fictionalizing her experience covering the Mitt Romney campaign for the National Enquirer (while accusing her ex-husband of intentionally giving her an STD), and re-emerged in 2016 writing for far-right website Townhall.

That’s when she developed her now-trademark beat of accusing celebrities and liberal politicians of being pedophiles.

What stories is she known for?

Crokin claims that her “awakening” to the corruption and evil of the Democratic party came from reading the leaked John Podesta emails, and learning about the totally unfounded accusations against him. And like many fringe “researchers,” Liz Crokin’s videos and stories are a grab bag of conspiracy theories, all of which are presented without skepticism. But by far, Crokin’s niche is the supposed (though never proven) network of child trafficking rings infesting every level of business, politics, and entertainment.

To Crokin, virtually every liberal of any prominence is part of this network, with evidence or proof being unnecessary.

Crokin is a major promoter of both the Pizzagate conspiracy theory, which accuses Hillary Clinton and other prominent Democrats of running a child sex ring out of a D.C. pizza parlor; and it’s even more lurid offshoot QAnon.

Crokin is particularly devoted to QAnon, appearing on the livestreams and podcasts of QAnon promoters, selling Q-branded merchandise, and declaring at one point in 2019 that Jeffrey Epstein’s arrest was “just the beginning” of the conspiracy theory’s supposed sweeping up of deep state child abusers, known in Q circles as “The Storm.”

Liz Crokin has delved into every major theory of the last five years, with a particular emphasis on celebrities. Among Crokin’s most lurid allegations are:

Are any of these allegations true?

No. Crokin has been predicting mass arrests of pedophiles for several years, only for them to never materialize.

Crokin had her Twitter verification pulled in late 2017 after harassing John Legend and Chrissy Teigen for their supposed involvement in child trafficking. She was banned from Twitter for good in 2018 after insinuating J.K. Rowling was covering for pedophilia on the set of the Harry Potter films. She still has 124,000 Instagram followers, though, and 148,000 subscribers on YouTube, where she prolifically posts new videos.

But that hasn’t stopped her. She’s now involved in the popular QAnon movie Out of Shadows.

The popular QAnon movie alleges that Hollywood is a massive network of linked pedophilia rings, all covered up by an industry that distracts us with entertainment to keep us from learning the horrible truth. As one of the most prominent QAnon-supporting media figures, Crokin anchors a section of the 77-minute film called “Pizzagate: Fact or Fiction,” discussing her usual conspiracy theories about child trafficking with the film’s director, former stuntman Mike Smith.

But has Crokin ever wavered in her faith in QAnon?

At times, she’s come close. In early 2019, Crokin declared that she would leave the QAnon movement if the long-promised mass arrests didn’t take place.

“Quite frankly, if [the arrests] don’t happen this year, then I’m going to have to bow out of this because exposing this for the past two-and-a-half years has really taken a toll on my health,” Crokin said in a live stream. “I’m going to have to move on because it’s just taken such a big toll on me and my health that I don’t think I can stay in this fight if it continues to drag on for years and years and if these mass arrests don’t happen this year.”

The arrests did not happen that year and Liz Crokin did not “bow out” of her belief.