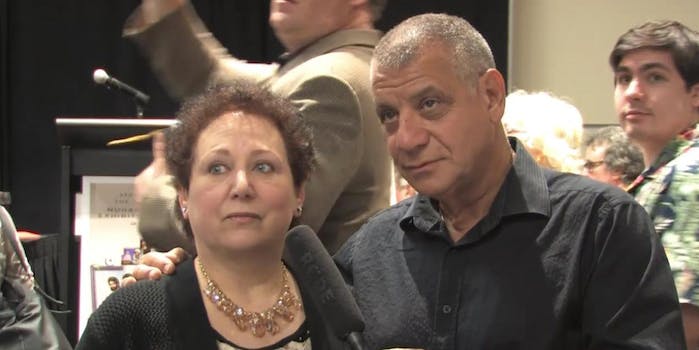 This is right when it happened.

The aftermath of a shooting that ended in the death of two gunmen was captured on a YouTube livestream on Sunday evening.

The shooting took place around 7pm CT outside the Muhammad Art Exhibit and Contest in Garland, Texas. The event was hosted by American Freedom Defense Initiative and featured Pamela Geller, a controversial anti-Islamist activist from New York.

The video, filmed by activist organization the United West, is taken inside the Curtis Culwell Center and features the announcement of the shooting by armed guards as well as the reaction of the event’s attendees.

“A police officer has been shot, two suspects have been shot. They possibly have explosives on them, that’s what we’re worried about right now,” an armed man told the crowd.

Further plans, including moving the crowd to the safety of the auditorium, were announced.

“Were the suspects Muslim?” a voice yelled.

“I have no idea right now,” the armed man replied.

“This is a war,” Geller wrote on her website after the shooting. “This is war on free speech. What are we going to do? Are we going to surrender to these monsters?”