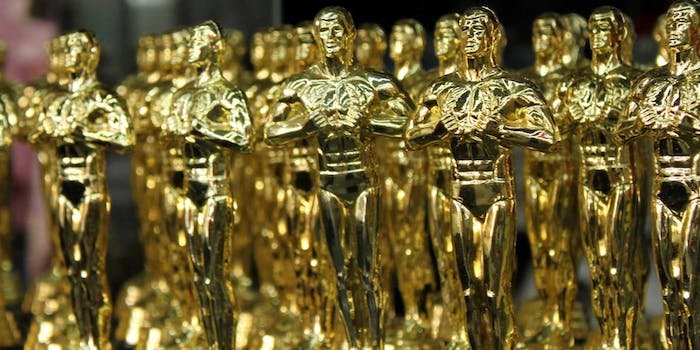 Livefyre’s #MyOscarSocial campaign uses Twitter and selfies to engage people with the Oscars.

How would you look standing next to Sandra Bullock? How about sidled up to Martin Scorsese? On Sunday, you won’t have to crouch awkwardly next to your freeze-framed TV to simulate a selfie with the stars. Livefyre has set up an impressively detailed project called #MyOscarSocial to help fans take photos posing with their favorite nominees and attendees at the 86th Annual Academy Awards.

Introducing #MyOscarPhoto — your chance to see yourself on the red carpet at the #Oscars! http://t.co/8Nx5wTNjMb pic.twitter.com/nhbdeYoBoX

#MyOscarSocial is ambitious: It requires that fans have a Twitter account, follow the Academy (@TheAcademy), and know how to tweet a picture at them. So this is clearly aimed at a younger demographic, a way to give a generation most likely to just watch clips of the Oscars online than the televised broadcast an impetus to stay tuned in. Celebrities will enter the booth and take pictures, and the selfies sent in by fans will flash on screen in 10-second increments. To appear onscreen, the selfie-tweeters will have to sign a waiver on Oscars.org, which means it’s likely that many of the selfies sent will be ineligible (if you want to appear on TV, make sure to take the extra step and sign that waiver).

The booth has a slow-motion camera, so it will capture each celebrity selfie and send it back to whoever tweeted the original photo.

This is a complicated project, but if it goes well, expect more sustained and sophisticated viewer engagement campaigns like it. The Next Web talked to Livefyre CEO Jordan Kretchmer about the project, and he noted that the primary intention is to highlight how much Livefyre can do with custom real-time streaming applications. “I think we’ll start to see a lot of other interesting use cases like this that aren’t exactly this execution,” he told TNW.

How will celebrities react to this interesting but obviously very hokey social engagement tool? We’ll have to watch to see who grins and bears the Twitter selfies… and who just grimaces.