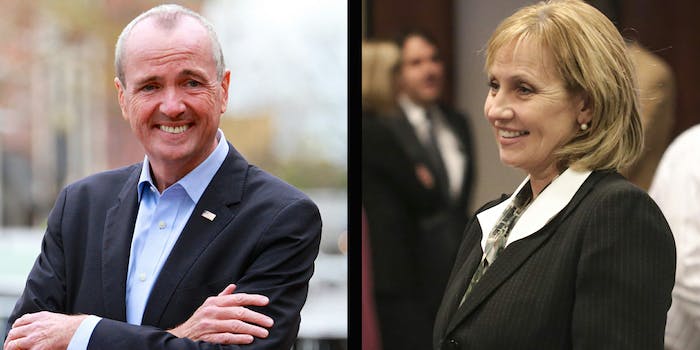 A former ambassador in Obama's administration faces off against Chris Christie's lieutenant governor.

New Jersey will be one of two states that will elect a new governor on Tuesday.

The two candidates, Phil Murphy and Kim Guadagno, aim to replace Gov. Chris Christie, whose popularity in the state has reached dismal levels—a poll in August found only 16 percent of New Jersey residents had a favorable view of the governor.

While polling shows Murphy with a comfortable lead heading into Election Day, some analysts believe there will be record-low voter turnout, which may have an effect on who wins.

Here is a brief rundown about the race between Murphy and Guadagno, what to watch for as the results come in starting at 8pm ET, and a live tally of the results courtesy of Decision Desk HQ. (Some browsers may need to refresh for the latest results to appear.)

Update: Murphy has beaten Guadagno to become the next governor of New Jersey. In Virginia, Democrat Ralph Northam triumphed over Republican Ed Gillespie.

Who is Phil Murphy?

Murphy, 60, is the Democrat running in the governor’s race. Murphy retired from Goldman Sachs in 2003 and served as the U.S. ambassador to Germany from 2009 to 2013 under former President Barack Obama‘s administration. He also served as the Democratic National Committee’s finance chairman for several years.

Murphy’s campaign has proposed making New Jersey the second state to run a “public bank” that would lend out low-interest loans to residents.

Who is Kim Guadagno?

Guadagno, 58, is the Republican running in the governor’s race. She served as Christie’s lieutenant governor since 2010. Before that, she served as a county sheriff, assistant state attorney general, and assistant United States attorney for the district of New Jersey. Her campaign has heavily focused on lowering property taxes.

The former lieutenant governor has tried to distance herself from Christie as his popularity continues to remain low.

Anyone else on the ballot?

Who is expected to win?

Phil Murphy is predicted to win by a healthy margin, according to the latest polls. Real Clear Politics has Murphy leading Guadagno by 14.4 points on average, winning with 49.5 percent of the vote compared to 35.1 percent of voters picking the Republican challenger.

What’s a hot-button issue in New Jersey this election?

Marijuana legalization has become one of the most contentious questions facing Murphy and Guadagno.

Christie has repeatedly said he is against adding New Jersey to the growing number of states that have legalized marijuana. He once referred to hypothetical revenue the state would get from taxing pot as “blood money.”

Murphy supports legalizing marijuana in the state for recreational use and has said he would sign a bill within the first 100 days of his term to legalize the drug. Murphy said he supports people 21 and older buying marijuana and taxing the sale of it.

Meanwhile, Guadagno has said she would support decriminalizing marijuana, so those caught with it would face a fine instead of incarceration.

Voter participation in today’s election is expected to be quite low. According to NJ101.5, less than 40 percent of voters participated in the 2013 gubernatorial election in New Jersey, and many pollsters think that number could drop in 2017.

“We’re looking at a record low turnout,” Monmouth University poll director Patrick Murray told the news outlet. “I think based on past turnout, based on what folks are telling us they’re going to do this time around, there’s significantly less interest in this election, that turnout is probably going to be somewhere in the 37 to 38 percent of registered voter territory.”

Polls close at 8 p.m. ET. You can watch live results of New Jersey’s election below, powered by Decision Desk HQ: