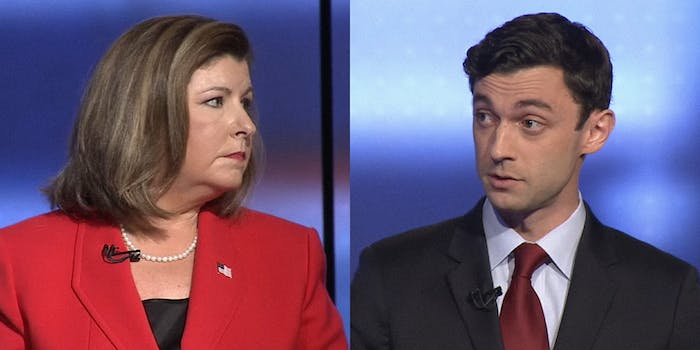 It's going to be close. Here is a live look at the results.

On Tuesday voters in Georgia’s 6th Congressional District headed to the polls to vote for either Jon Ossoff, a Democrat who has never sought public office, or Karen Handel, the former Republican secretary of state to replace Tom Price, President Donald Trump’s new secretary of health and human services.

It was the most expensive and perhaps most closely watched race for a seat in the House of Representatives ever in a district that has been solidly Republican for decades.

The bitterly contested race caught waves of national attention as Democrats saw an opportunity to strike in a long-held Republican safe haven and gauge whether or not Ossoff and his pushback against the GOP-led effort to repeal and replace the Affordable Care Act could be a winning formula in the 2018 midterm elections in other Republican strongholds.

In many ways, the race for Georgia’s 6th Congressional District was a referendum on Trump’s early presidency and agenda.

Here’s a brief rundown on what to expect as results pour in on Tuesday night. (Note: Some browsers need to refresh the page to see the latest results.)

Update 10:04pm ET: Republican Karen Handel beats Democrat Jon Ossoff, bringing an end to the most expensive House race in U.S. history and setting the stage for Democrats to reassess their strategies in the Trump era.

Ossoff and Handel are aiming to replace Tom Price, a long-time representative in the district who resigned from his seat to become the secretary of Health and Human Services in the Trump administration. An initial vote in April was so close that it triggered a run-off election.

The race is the first real opportunity Democrats saw as a chance to flip a district from Republican to Democrat. While others—such as the race in Montana between Greg Gianforte and Rob Quist—were not seen as likely to switch from red to blue.

The competition between Ossoff and Handel has attracted wide-spread attention and tons of money. The cost of the race has topped $50 million, according to media outlets, and both sides see an opportunity to send a message to American voters ahead of the polls next year.

Democrats are hoping to show that voters are upset with Trump’s (and Republicans’) agenda, and having Ossoff win a district that has been red since the 1970s would give them momentum heading into 2018—when more than 30 senators and all of the House of Representative seats are up for grabs.

Meanwhile, Republicans are obviously hoping to keep a seat in the House of Representatives—Handel winning would give them confidence that things are working.

The race has gotten heated in recent weeks, with one Georgia Republican saying that he thinks the shooting of Rep. Steve Scalise (R-La.) at a congressional baseball practice last week will help Handel in the polls.

Who is Jon Ossoff?

Ossoff, 30, is a former congressional aide and documentary filmmaker who raised millions of dollars for the special election. He has never run for political office and has centered his message on the economy, healthcare, civil rights, and women’s rights.

Ossoff has been courting liberal voters who are furious with Trump’s agenda and moderate Republicans who see Trump’s version of conservatism as too fringe. As such, some far-left politicos have described his as centrist.

Ossoff has raised nearly $24 million in the race, according to the Atlanta Constitution-Journal.

In his initial campaign announcement, Ossoff firmly planted himself in the anti-Trump camp, hoping to stir support.

“Donald Trump is an embarrassment and a threat to prosperity and health, justice, and security in the Sixth District. I’m running to stop him and to fight for our community in Congress,” he said in his announcement.

Who is Karen Handel?

Handel served as Georgia’s secretary of state from 2007 to 2010, and has centered her campaign on fiscal conservatism and pledging to reduce regulation. Handel, like Trump, has campaigned on tougher immigration laws and simplifying the tax code. Handel has also served as an executive at the breast cancer foundation Susan G. Komen and failed in a bid to run for governor in 2010.

Handel has raised millions of dollars from outside groups like conservative Super PACs to help keep up with Ossoff. She has also had fundraisers with Trump, Vice President Mike Pence, and House Speaker Paul Ryan, according to the Atlanta Constitution-Journal.

However, Handel has come under fire for her anti-abortion and anti-LGBTQ views. She was caught on tape telling a mother of an LGBTQ daughter why she can’t advocate for her to be able to adopt kids and while running for governor said that she would “consider” passing legislation that limits adoption to only heterosexual couples.

Trump has weighed in on the election several times, stumping for Handel on Twitter.

It’s going to be close. Most polls for Georgia’s 6th Congressional District show Ossoff with a lead heading into Tuesday, but a victory for Democrats will likely hinge on liberal voters showing up to vote in a heavily conservative-leaning district.

A poll conducted by Landmark Communications found Ossoff leading Handel 49.0 percent to 48.9 percent, with a 4.4 percent margin of error.

Polls close at 7pm ET but more than thousands of ballots were mailed in early. Overall voter turnout is expected to go beyond the 190,000 who voted in April’s election. Weather could also play a roll, as it’s expected to rain—which could cause voters to sit the election out.