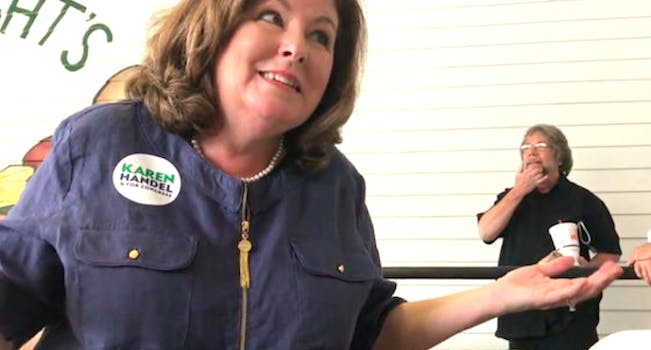 The Georgia Republican made it clear that her 'faith' matters.

Karen Handel, Georgia’s former secretary of state and the Republican candidate in Georgia’s 6th Congressional district election, explained to a mother of an LGBTQ daughter why she can’t advocate for her to adopt kids.

A snippet from the chat was caught on video, and according to a report by the New Civil Rights Movement, Handel was caught off guard by the concerned mother’s question that came up during a meet-and-greet Thursday at a sandwich shop in the district.

The mother openly states that she leans more conservatively but that she is “torn” on Handel’s LGBTQ stance. After stating that her daughter is part of the LGBTQ community, the unnamed woman asks, “What protections do I have for her having a family in the future, being able to adopt and have kids?”

“I have to be honest,” Handel begins. “My faith calls me to a different place on the issue,” she says as she places hand over heart. She further explains that her faith “also calls me to be compassionate, and so I always try to do that.” Handel shifts gears and continues, “I’m not aware of anything in the law, right now, that I’m aware of, that’s going to be impactful, from a discriminatory standpoint, against your daughter.”

The mother responds by stating that her concerns lie mostly with Vice President Mike Pence because of his “staunch stance” on LGBTQ issues before Handel interjects that “the issue’s been decided by the U.S. Supreme Court.”

Though there is no fracas, the exchange ends abruptly with Handel standing up and shrugging her shoulders mid-conversation. “I hear ya,” she says to the mother as she is still speaking.

According to the Georgia Voice, Handel spoke to Reporter Newspapers’ Dyana Bagby the same day and spoke further on the controversial issue:

Watch the video below.