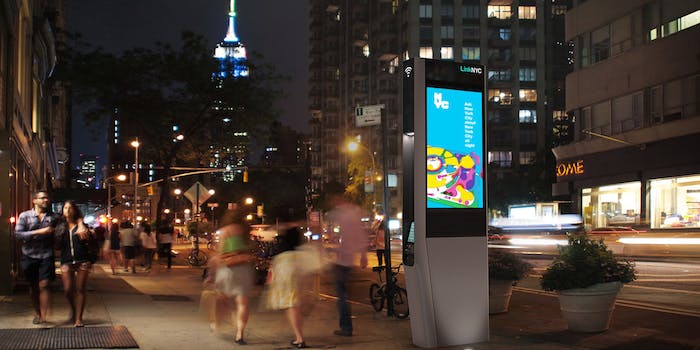 Old school payphones will soon be a thing of the past, and if the City of New York and a consortium of tech companies have their way, those eyesores will be turned into a series of Wi-Fi and communication hotspots called Links.

Links will provide free “gigabit speed”-encrypted Wi-Fi connection, an Android tablet to connect with city services, a charging station, and free phone calls to anywhere in the U.S. If approved, the city will get up to 10,000 Links installed throughout the five boroughs, LinkNYC anounced on Monday.

This isn’t the first time New York has turned payphones into hotspots. In 2012, it rolled out a pilot program that provided Internet connectivity to a handful of payphone locations. However, this program didn’t remove the phones, just added Wi-Fi. The idea to turn payphones into Internet hotspots has been bandied about for a while, but New York City is finally making it a reality.

LinkNYC, the organization behind the Links project, is a partnership between the New York Mayor’s Office of Technology and Innovation, the Department of Information Technology, and CityBridge, a group that includes companies like Qualcomm and Transit Wireless.

The organization says Links will not cost taxpayers a dime and will be funded entirely through advertising revenues. Like payphones, Links will have large banner ads that appear on the side of each structure. According to LinkNYC, the new kiosks will actually make up to $500 million for the City in the first 12 years thanks to such ads.

Once approved, the Link system is expected to roll out in 2015.