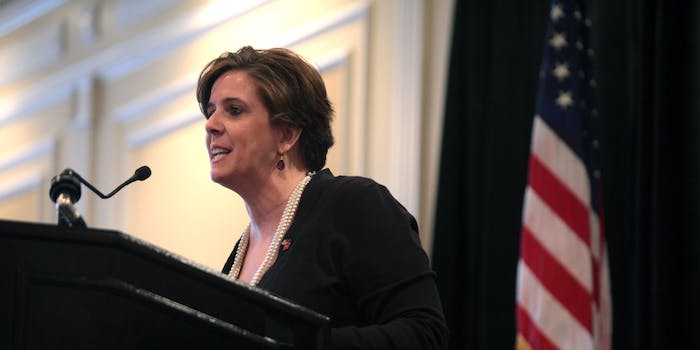 The Lincoln Project will shame a woman for salary demands, won’t admit how much its male co-founders make

The anti-Trump super PAC won't cough up the cash for its only female co-founder.

Last week, the Lincoln Project parted ways with co-founder Jennifer Horn. Each side has since claimed a different cause for their very public breakup.

The political action committee claims that Horn resigned after they refused her demand for hundreds of thousands of dollars. Horn says she left over the “grotesque and disgusting behavior” of fellow co-founder John Weaver.

Weaver is accused of sending unsolicited sexual messages to 21 young men, some in their teens at the time. The Lincoln Project has consistently denied that any of its co-founders knew about Weaver’s conduct, for which he has apologized. He was already on medical leave and has since reportedly permanently departed the organization.

Some believe that the prominent anti-President Donald Trump super PAC knew about the accusations for months. Yesterday, Fox News reported that one of Weaver’s accusers told Lincoln Project co-founder Mike Madrid about the messages last summer.

On Feb. 5, Horn announced her departure and cited the scandal as her reason for leaving.

The Lincoln Project came back swinging for some reason. In a separate statement, it claimed that Horn had actually demanded $250,000 as a signing bonus, a seat on the board, and $40,000 per month in a consulting contract.

It further claimed she said her goal was “to establish immediate and long-term financial security.”

Since it was so OK to air the salary demands of a co-founder, the question is what was so out-of-line, given that Lincoln Project co-founders have paid down debts and purchased high-end homes after the project started.

So the Daily Dot reached out to the Lincoln Project to see if they would disclose other co-founders salaries, to explain what was so out-of-line with with Horn’s demands.

They chose not to respond to multiple inquires. Emails to their press team went unreturned, as did messages to co-founders Rick Wilson, Steve Schmidt, and George Conway.

This isn’t the first time the subject of how the Lincoln Project spends its money has arisen. From its December 2019 inception through the November election, it raked in an astonishing $67 million.

The PAC has been heavily criticized for spending millions of that haul at co-founders’ firms. For these and other reasons, many have claimed it’s nothing but a grift. The co-founders take serious umbrage with this assertion.

In a quote to the Associated Press today about its finances, it said it would open its books when Trump did.

Just after the election, Rep. Alexandria Ocasio-Cortez (D-N.Y.) tweeted that it was “in scam territory” because she viewed it as ineffective. Others have shared that opinion, including one of the super PAC’s own advisers.

Some data has since backed that up. In December, a study found that its Twitter ads hadn’t actually worked.

The subject of how it spends its money has attracted so much scrutiny that The Late Show With Stephen Colbert ridiculed its high overhead in a segment last year. When concerns over its overhead erupted, the PAC pledged it would come down the next quarter. It didn’t.

Many took the Lincoln Project at its word about why the only female co-founder left.

“I love LP and was disturbed by the NYT article where she BASHES LP,” commented one fan. “This clarifies things.”

More took Horn’s side. They felt that the Lincoln Project was out-of-line for displaying its dirty laundry, and that Horn was actually in the right.

“Now tell us what the guys are pocketing — and just how is it some are ‘equity partners’ while others aren’t????” Cheri Jacobus tweeted.

Some felt that the latest saga was just more the same from the multi-million dollar super PAC and everyone involved.

“Grifters gonna grift (all of you are grifters btw),” one of its critics remarked.

The Lincoln Project seems unbothered by such criticisms. It’s keeping busy running ads in the Mar-a-Lago media market for some reason, tweeting prolifically, and, of course, cashing checks.

Since mid-December, it’s raked in $5.8 million in contributions, per Federal Election Commission records. One person who isn’t getting any of that money: Jennifer Horn.