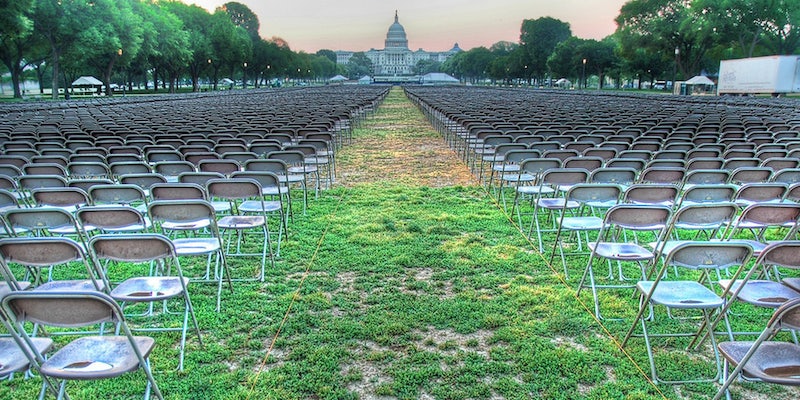 If all goes to plan, Mayday will be the super PAC to end all super PACs.

Fighting big money in politics was never going to be cheap. But that hasn’t stopped Lawrence Lessig of Harvard Law School from fighting fire with fire. His grassroots Mayday campaign to bankrupt big money in politics has surpassed its $5 million crowdfunding target, and is eyeing a major upheaval in the 2016 congressional elections.

Over 50,000 people, plus a handful of rich donors, pledged money to end the financial arrangement that allows corporations and wealthy individuals to spend unlimited money in elections.

If all goes to plan, Mayday will be the super PAC to end all super PACs. Literally.

As a result of two 2010 court cases known as Citizens United and SpeechNOW vs. Federal Election Commission, supposedly independent but often strongly partisan “political action committees” can spend unlimited amounts bankrolling election campaigns. Super PACs spent half a billion dollars trying to influence the 2012 polls. Seventy-eight percent of that money was spent on negative campaigning and attack ads, according to the Los Angeles Times.

In this context, $12 million—attained through a $7 million donor drive plus matching funds from five mystery donors, reports Mediaite—is almost nothing. But Lessig thinks the grassroots money he’s raised will be enough to fund congressional candidates who support campaign finance reform.

“The reform we support will eliminate the conflict of interest between Congress’s duty to serve the people and incentive to serve the funders by making the citizens the funders,” Lessig wrote.

The anti–super PAC will come out gunning in the next federal election, in 2016, when America votes for a new president and Congress.

“By 2016, we’re going to elect a Congress that will fundamentally change how campaigns are funded,” Lessig wrote last week in a letter to supporters on the Mayday website. “You have guaranteed it.”

The candidates Mayday will support have yet to be announced.

Photo via Stuck in Customs/photopin (CC-BY 2.0)