Rambus Labs has made photography's next great leap.

I’m no optics expert, but the idea of a microchip camera without a lens seems what we laypeople would call “impossible.” And yet that’s exactly what David G. Stork and Patrick R. Gill of Rambus Labs have managed to do. They published a groundbreaking paper that introduces “a new class of lensless, ultra-miniature computational imagers and image sensors.”

As pointed out on Phys.org, we’ve been using smaller and smaller camera lenses for years as technology in general shrinks, but we’re recently begun to reach the limits of what we can accomplish this way. In order to make cameras truly tiny, Stork and Gill discovered, you can just do away with that part altogether. Instead they employed “special optical phase gratings integrated with CMOS photodetector matrices.” As a result “the ﬁnal digital image is not captured as in a traditional camera but instead computed from raw photodetector signals.” 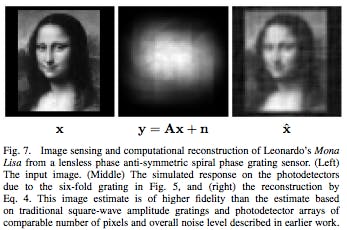 In other words, the camera is just a chip embedded in a piece of glass, and a pattern etched on that glass allows the refraction of light into the chip. The data received wouldn’t make sense to the human eye; instead the device figures out what it’s looking at using a specialized algorithm and renders a somewhat blurry (though recognizable) 128×128 image. While the camera has an expansive depth of field—from 1 millimeter to infinity—the chip and pattern themselves are just 100 micrometers across, the thickness of a coat of paint, strand of hair, or particle of dust. 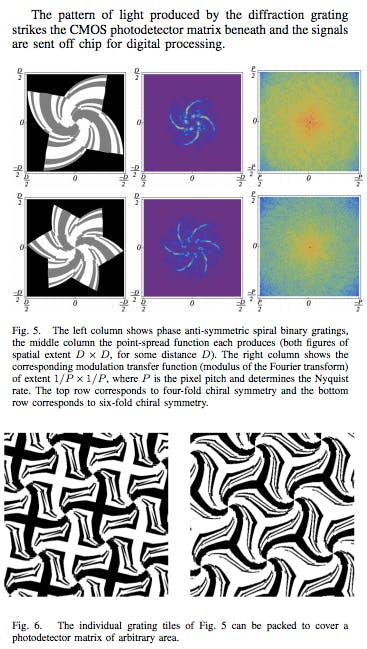 Aside from applications in mobile and surveillance devices, the inventors deemed their inexpensive new technology “especially appropriate for medical and industrial endoscopy.” It could also be used for motion detection, or the dreaded facial recognition systems soon to dominate our waking lives. Even sophisticated gesture-reading is theoretically within reach, thanks to the camera’s customizable design. What’s scarier than any of that, though, is the thing’s radical size: implantable anywhere, and small enough that you can’t see it seeing you.