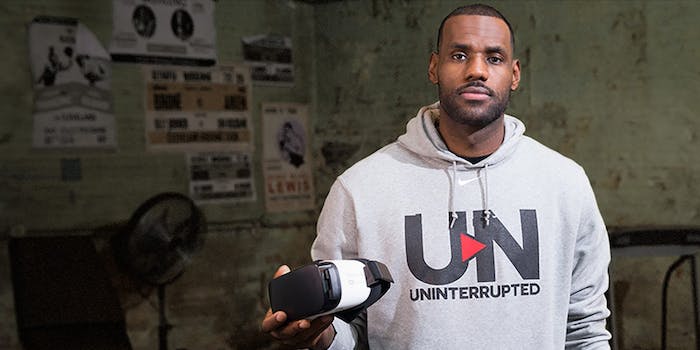 The basketball star is diving into VR.

You can now fully immerse yourself in the life of LeBron James. The Cleveland Cavaliers megastar launched a new virtual reality production that gives viewers a glimpse into how James geared up for his 13th professional basketball season.

Developed in partnership with Oculus Studios, VR studio Felix & Paul, and James’s own media company Uninterrupted, the 12-minute documentary called Striving for Greatness: An Uninterrupted Original has immersive footage of the all-star’s training regimen and interviews with trainers and James, Variety reports.

The documentary is available for Samsung’s Gear VR headset, the $99 virtual reality system compatible with Samsung devices. You can get it via Milk VR and the Oculus Store.

Fans who don’t have access to the virtual reality headset developed in partnership with Oculus can also view the five episode series in 360-video on Uninterrupted’s Facebook Page.

Though VR hasn’t quite hit mass adoption, yet, athletes and sports organizations are figuring out new ways of using the tech, both for training purposes and fan service. The Dallas Cowboys are using VR to train quarterbacks, and earlier this year, the NBA partnered with Turner Sports and nextVR to stream the season opener on Samsung Gear VR devices.

Startups, too, are trying to capitalize on teams’ first steps into using technology to train athletes. EON Reality works with teams from high school to Major League Baseball, and predicts that using VR will democratize the way athletes train.