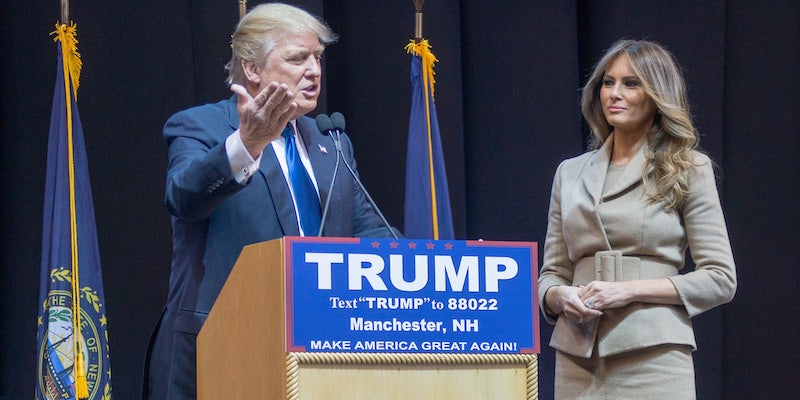 'Your next first lady.'

The 2016 presidential election just got dirty.

As Utah voters head to caucus on Tuesday for the state’s Republican presidential contest, they might see a fresh crop of ads in their Facebook and Instagram feeds that are sure to raise some eyebrows.

Make America Awesome, a super PAC that opposes Donald Trump, has released a series of online ads in an attempt to sway voters away from the New York businessman, reports BuzzFeed. The ads are targeted at Mormon voters, at least 10,000 of which the super PAC hopes to reach with the ads.

One of the ads features a Trump quote in support of a woman’s right to have an abortion. (Trump has since walked back his pro-choice stance.) A second ad features 2012 Republican presidential nominee and former Massachusetts Gov. Mitt Romey, who is Mormon and has come out strongly against Trump. Mrs. Trump is a former model who has appeared on the covers of a number of major publications, including Vogue, GQ, and New York. The super PAC used a racy photo from the GQ shoot, along with the text “Meet Melania Trump. Your next first lady,” in an attempt to push religious voters to Trump’s strongest rival, Sen. Ted Cruz (R-Texas), an evangelical Christian. If no candidate receives more than 50 percent of the vote in the Utah caucus, the state’s 40 Republican delegates will be awarded proportionally, meaning the candidates will divide the delegates depending on their portion of the total vote.

However, if any candidate receives more than 50 percent support, that candidate wins all 40 delegates—more than 15 percent of the 256 delegates that separates Cruz from Trump, who has 680 of the 1,237 delegates needed to secure the nomination.

Cruz is the favorite to win the state, with the two most recent polls from the state giving the Texas senator a lead of more than 20 points.

Trump’s campaign did not respond to a request for comment.

Update 10:05pm CT, March 22: The ad has resulted in a feud between Trump and Cruz, with Trump threatening to “spill the beans” on Cruz’s wife, Heidi. Cruz responded by calling Trump a “coward.”