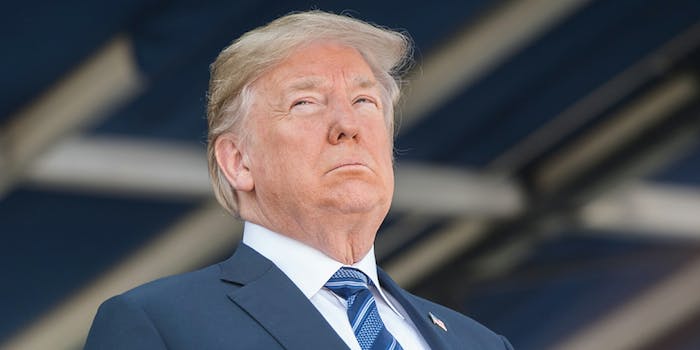 The application could provide crucial insight into the president’s personal views on gun laws and gun safety.

Early in his campaign for president, Donald Trump stood before a crowd of fans and declared he could “shoot someone on the middle of Fifth Avenue” and not lose any supporters.

The president has penchant for hyperbole, but he does own a firearm. Trump is licensed to own and carry a handgun in New York City, and yesterday, the Daily Dot filed a lawsuit against the NYPD under the state’s Freedom of Information Law to disclose President Trump’s application for a concealed carry permit.

New York City has some of the nation’s most stringent concealed carry laws, but the Trumps were granted permits to keep guns in their residences and places of businesses.

The president and his sons were disclosed as concealed carry permit holders in 2013, when media outlets published a list of gun owners in New York City.

To obtain that license, Trump had to complete a comprehensive application, answering why he had a right to own a weapon, how he would safely store it, and how he was trained to properly handle it, among dozens of other questions.

As the gun debate rages in America, the president has spoken openly about his concealed carry weapon and whether firearm ownership should be restricted. We wanted to see why Trump believes he needs a concealed carry permit.

So we sent a FOIL request (New York state’s version of the federal government’s FOIA) to the NYPD for his application, believing it to be a matter of public interest. It was denied on the grounds that releasing the information could endanger his life.

Given the round-the-clock and all-encompassing protection he receives from the United States Secret Service, we don’t buy that, and yesterday we filed suit in New York County Supreme Court to force the NYPD to release to us a copy of President Trump’s application for a concealed carry permit.

The Daily Dot is partnering with Davis Wright Tremaine, which has a history of bringing FOIA and FOIL cases against the government in matters that shape the public discourse. We believe the release of Trump’s application will reveal a great deal about the president’s stance on firearms.

“The grounds for disclosure of the Trump license applications under New York’s Freedom of Information Law are very strong,” Jim Rosenfeld, Davis Wright Tremaine partner and former co-chair of the media group, told the Daily Dot. “The Trumps have long been outspoken advocates for gun rights, and spoken publicly about their own gun ownership. The president is the chief law enforcement official in the country and has said he is reviewing the current gun laws in the wake of the school shootings in Parkland and elsewhere, and his sons serve as advisors to him on gun-related issues. In light of their very public positions and many public statements on these issues, we don’t believe any of the exceptions the police department claim to the general presumption of openness enshrined in the law are compelling or legally valid with respect to the Trumps’ own gun records. These records should be made available to the public.”

What would Trump’s concealed carry application from the NYPD show?

Trump’s stance on guns—including concealed carry weapons like the ones he has in New York—could provide insight into how the president will react as gun reform debates continue in the wake of school shootings in Parkland, Florida, and Santa Fe, Texas, and other violent shootings that have happened in the United States.

Amid all this, Americans are increasingly showing a desire for stricter gun laws. A Gallup poll shows that 67 percent of Americans believe laws covering the sale of firearms should be stricter than they are now, and 41 percent of those polled said Congress should focus on “laws and gun ammunition” to help prevent school shootings. Of those who said they were “dissatisfied” with the nation’s gun laws, 46 percent said they wanted stricter laws.

Likewise, following the Parkland shooting, support for gun control among Americans hit a record high, according to a Quinnipiac University poll.

The president has not been shy in the past about his use of guns. Speaking with the Washington Times in 2012, Trump said he owned an “H&K .45,” a semi-automatic pistol, and a “.38 Smith & Wesson,” a smaller pistol with a revolving chamber.

Now, as the head of the country, Trump is in charge of enforcing gun laws and evaluating possible gun reform measures, and he has been at the center of the gun control debate. The president’s gun permit application will provide the public with specific answers that will illustrate the thoughts behind the president’s position on gun ownership as Americans on both sides debate the Second Amendment.

For example, the president famously called for arming teachers in the wake of the Parkland shooting, and the White House said those teachers would need to have “rigorous firearms training,” according to the New York Times.

Meanwhile, the application for anyone who wants to own a handgun in New York City asks for a detailed description of the applicant’s employment and an explanation of why the employment requires the carrying of a concealed handgun. It also requires a statement indicating that the applicant has been trained or will receive training in the use and safety of a handgun.

The answers the president gave on his application will shed light on his long-held views surrounding both gun laws and gun safety.

Until 2013, applications for gun permits and licenses were uniformly considered public record and subject to FOIL. But the New York State Assembly passed a law that year that allows permit applicants to exempt themselves, and their applications, from the state’s FOIL laws.

The criteria for an application to be exempted from the public record can be quite clear. Police officers, domestic violence victims, jurors involved in criminal trials, and witnesses to crime can be exempted, since exposing their personal information would put them at risk.

But the law has also been interpreted more broadly: Concealed carry permit applicants who fear for their life or are concerned about unwarranted harassment of any kind can also request that their applications be exempt from public record.

Some of these exemptions make sense. President Trump’s does not.

On Feb. 1, 2018, the NYPD denied the Daily Dot’s FOIL request on the grounds that disclosure of the license applications would supposedly result in an “unwarranted invasion of privacy.”

In Trump’s case, this exemption is unreasonable; nearly everyone who could potentially request copies of the permit application knows the location of all of Trump’s homes; they can contact him through Twitter or the White House’s website; he’s claimed publicly that he owns guns and has a concealed carry permit. Because of this, we believe the president’s right to privacy on the matter has been waived.

The NYPD gave no further explanation for its denial.

Then, when Daily Dot filed an administrative appeal with the NYPD on Feb. 18, 2018, the NYPD added as an additional ground for denial that disclosure of the permit license applications would supposedly endanger the president’s life.

Our appeal was denied, and so, believing it to be an urgent matter of public interest, we filed suit against the NYPD to comply.

The Daily Dot does not undertake the decision to sue lightly; we did so because public records are essential to our understanding of public figures, and their words recorded under oath—especially when they have the ability to shape the law on one of America’s most pressing matters—are the utmost of public interest.

You can view the Daily Dot’s suit against the NYPD below.

See the memorandum of law in support of the petition here: