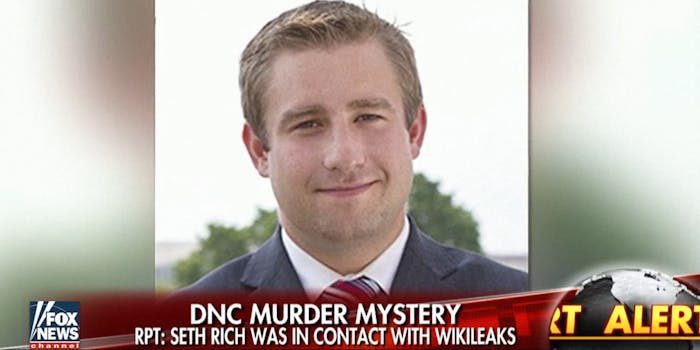 The lawsuit has some serious accusations.

NPR first reported on the lawsuit, which was filed by Rod Wheeler, a paid commentator for Fox News who was cited by the network in its retracted report about Rich’s murder that linked it to emails leaked to WikiLeaks.

Wheeler alleges that Fox News and a wealthy Trump supporter wanted the conspiracy to take attention off of the growing probe by investigators into possible connections between Trump’s presidential campaign and Russia.

In May, Fox News published a story that perpetuated the conspiracy that Rich was killed for leaking DNC emails to WikiLeaks, a notion that grew because Julian Assange seemed to suggest the late aide’s involvement. Fox News pundit Sean Hannity threw the conspiracy into overdrive by dedicating large amounts of his show to the story.

Fox News’ story was criticized by Rich’s family, and ultimately retracted by the network a week later for failing to adhere to its editorial standards.

Fox News’ president of news, Jay Wallace, told NPR that there was no “concrete evidence” Wheeler was misquoted in the redacted story, but he did not address the alleged connection between the story and the White House.

Ed Butowsky, a wealthy supporter of Trump and unpaid Fox commentator, offered to pay for Wheeler to investigate Rich’s death, NPR reports. A month before the Fox News story ran, the two men met with former White House Press Secretary Sean Spicer to brief him on what they found.

The first page of the lawsuit has quotes from a voicemail and text messages that show Butowsky boasting that Trump himself reviewed Fox News’ story before it was published.

“Not to add any more pressure but the president just read the article,” the text message read, according to NPR. “He wants the article out immediately. It’s now all up to you.”

Butowsky told NPR that he was kidding about Trump reading the report. Spicer also told the news outlet that he was unaware of any contact between Butowsky and Trump and that he took the meeting out of courtesy.

You can read all of NPR’s report here.