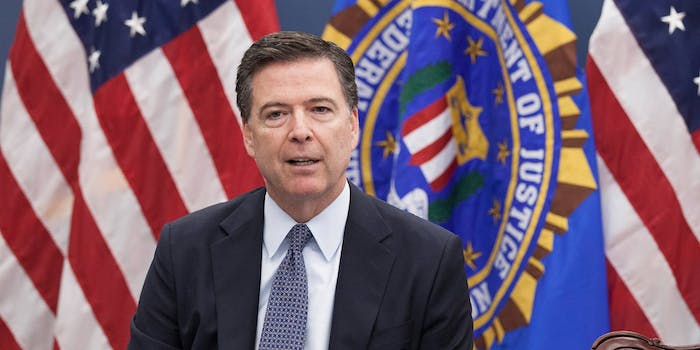 Many in Congress expressed shock on Twitter following the news that President Trump had fired FBI Director James Comey.

To put it simply, many in Congress were stunned. Democrats in both the House of Representatives and Senate quickly voiced their concerns:

Sen. Ron Wyden (D-Ore.) said that Comey should “immediately” be called to testify about the status of the investigation into Trump’s campaign ties with Russia.

In America the truth always comes out, @realDonaldTrump.

Meanwhile Sen. Tim Kaine (D-Va.)—Hillary Clinton’s vice-presidential nominee in the 2016 election—seemed to think the firing showed some unsettled nerves in the Trump administration.

Don't be fooled, this is about Comey investigating #TrumpRussia. Trump's justification is nothing but pretext to stop investigation. https://t.co/Jq7vnVuxIf

Similarly Rep. Eric Swalwell (Calif.-15) seemed to think the firing meant something more than just not agreeing with the FBI’s leadership under Comey.

This is not what an innocent person would do. Firing the guy investigating #RussianHacking — without cause — is consciousness of guilt. https://t.co/KZkci2XRqc

In a video, Sen. Cory Booker (D-N.J.) said there was an “urgent need” for an independent special counsel to look into Russian interference into the election.

Now it's even more important that an independent special counsel is appointed to investigate the Russian interference in our elections. pic.twitter.com/WcoxtbfSyW

Democratic Rep. Steve Cohen on Comey firing: "This is sadly reminiscent of the Saturday Night Massacre" under President Nixon pic.twitter.com/VH1S2u57uU

Bob Casey, a senator up for re-election in 2018 in a state Trump won, calls this Nixonian pic.twitter.com/MMctExDfGI

Sen. Brian Schatz (D-Hawaii) said that soon “patriotic” Republicans will need to “stand up for our republic.”

Lots of justified confusion and outrage. We need to be prepared to come back together, regardless of party, and take our democracy back.

We need an independent, 9/11 style investigation to look into Russia's meddling in our elections & Putin's hold over this administration.

EXTREMELY suspicious that the President and Attorney General just fired the man who is investigating them.

“President Trump called me at 5:30 p.m. and indicated he would be removing Director Comey, saying the FBI needed a change. The next FBI director must be strong and independent and will receive a fair hearing in the Judiciary Committee.”

FEINSTEIN: “President Trump called me at 5:30 p.m. and indicated he would be removing Director Comey, saying the FBI needed a change." pic.twitter.com/SuhXWFEvJw

As for Republicans, as of 6:55pm ET, only one Republican on the Senate Judiciary Committee had tweeted about the firing.

Given the recent controversies surrounding the Director, I believe a fresh start will serve the FBI and the nation well.