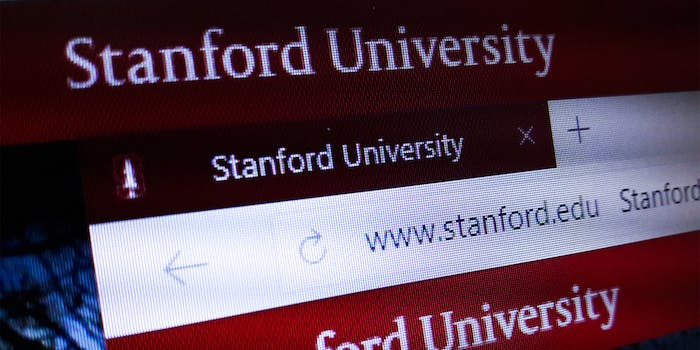 ‘The Federalist Society could not endure to be mocked’: Law student almost barred from graduating over satirical email

Stanford University reversed its decision to ban a law student from graduating following a massive social media uproar. The university initially said it would not let him graduate for emailing a satirical flyer poking fun at federalists.

“We’re glad that Stanford finally backed down, but it should not take a Twitter firestorm to figure out that administrators should not be conducting investigations into student political speech,” Adam B. Steinbaugh, a director at Foundation for Individual Rights in Education (FIRE), told the Daily Dot on Thursday.

FIRE, which defends students and faculty members’ right to free speech, sent Stanford University a letter on Tuesday voicing its concern over the fate of Nicholas Wallace’s degree and claiming that the investigation would violate the University’s “commitment to freedom of expression and California law.”

In January, Wallace shared in a law school listserve a satirical flyer titled “The Originalist Case of Inciting Insurrection.”

The flyer said the event was being organized by the Stanford Federalist Society and that it would take place on Wednesday, Jan. 6, the date of the Capitol insurrection. The flyer was sent out on Jan. 25 in an email listserve, Slate reported, indicating that it was a statement on the incident and not an actual event.

“Riot information will be emailed the morning of the event,” read a part of the flyer, which was originally posted in a public Facebook group for law school students with more than 100,000 members.

“Violent insurrection, also known as doing a coup, is a classical system of installing a government,” read another part. “Although widely believed to conflict in every way with the rule of law, violent insurrection can be an effective approach to upholding the principle of limited government.”

The flyer further said the event would have Texas Attorney General Ken Paxton justifying how a “violent mob to storm the Capitol represents an appropriate alternative remedy” when the Supreme Court refuses to deny results of a free and fair election.

It also poked fun at Sen. Josh Hawley (R-Mo.), a Stanford University graduate and a contributor to the Federalist Society, who was one of six Republican senators to oppose the results of the Nov. 3 election results, an instrumental factor in the Jan. 6 riot.

The Stanford wing of the Federalist Society had refused to condemn the society members’ involvement in the Capitol insurrection, which the flyer seemingly mocked.

In March, a student member from the Stanford wing of the group filed a complaint against Wallace, claiming that the flyer “defamed the student group” as well as the politicians it named.

The complaint also said many people were “deceived” into thinking that the flyer was actually from the Stanford Federalist Society, and one student condemned the society for having “poor judgment.”

As a result of the flyer, the complaint claimed, “Other student groups have asked to cancel joint events planned with the Federalist Society as a result of the controversy created by the email.”

Despite the initial complaint being filed two months ago, the society demanded a formal investigation into the matter in May as graduation was looming, according to Slate.

On May 27, the last day of classes, Wallace was told about the investigation and that he would not be able to graduate on June 12, which would also halt him from taking the Michigan bar exam.

Following Slate’s article and the letter’s publication onlnie, there was massive uproar on social media. On Wednesday evening, “Federalist Society” was trending on Twitter. Most didn’t hold back on their sarcasm, either.

“i hope that the federalist society has the decency to apologize for this nonsense and focus on their core mission: denying civil rights to minorities,” one user wrote.

Stanford University has since suspended the investigation, saying that the content of the email falls under protected speech. The statement also said that it is standard procedure to put a degree on hold if a case against a student arises close to their graduation date.

On Wednesday evening, Slate journalist Mark Joseph Stern shared a screenshot of an email in which Wallace thanked his peers for their support.

“You all have shown what a wonderful community we have at SLS,” he wrote in one part of the email. “In an odd way, this has been a great reminder of what I love most about this place.”

He signed the email off with, “This email is not a satire.”

Steinbaugh of FIRE says Stanford needs to do better in the future.

“Vindicating Nicholas’ rights is not enough,” he told the Daily Dot. “Stanford needs to commit to a policy requiring that complaints involving student or faculty expression be reviewed to determine whether their speech is protected before opening a formal investigation.”

The Daily Dot has reached out to the Federalist Society and will update this report if it responds.