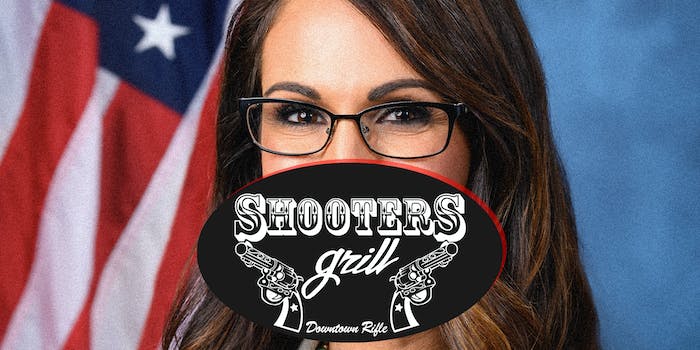 The conspiratorial congresswoman forgot to renew her trademark.

The logo for Rep. Lauren Boebert’s (R-Colo.) pro-gun restaurant is being sold as an NFT by a rival political group after the congresswoman let her ownership of it expire.

Rural Colorado United, a group dedicated to ousting Boebert from office, revealed in a tweet on Tuesday that it had obtained the trademark for the “Shooter’s Grill” logo back in February.

The group said that it had largely forgotten about the logo until recently when Boebert, a politician known for supporting outlandish conspiracy theories such as QAnon, began threatening a comedy writer.

Toby Morton, who has worked on shows such as South Park and MADtv, was accused of violating the law by Boebert this week over his parody website TheLaurenBoebert.com.

In the email to Morton, Jake Settle, Boebert’s press secretary, claimed that photos used on the parody site, which mocks the congresswoman, were “copyrighted property of the U.S Federal Government.”

“They are the property of the office of Congresswoman Lauren Boebert, and your use of them is unauthorized and illegal,” the email adds.

Legal experts quickly noted that the email was contradictory and made little sense, although it remains unclear if any of the photos used on the parody site are actually copyrighted.

Responding to the fiasco, Rural Colorado United leapt to the defense of Morton by announcing that it would be auctioning off the rights to the logo for Shooter’s Grill.

Rural Colorado United says all the proceeds will be used for the group’s fight to change “Republican minds about their Representative.”

Not only that, Rural Colorado United also noted that it had purchased the naming rights for “Shooters Gear,” the merchandise line run by Boebert.

“We also purchased the naming rights for Shooters Gear, which we will include in the overall package for whoever purchases the rights to the logo.”

Bri Buentello, a former Democratic lawmaker and spokeswoman for the group, told Colorado Politics that the incident was very “on-brand” for Boebert.

“It’s pretty hilarious when the consequences of your own actions show up—and it’s pretty on-brand for Boebert that she can’t even be responsible enough to keep up with her restaurant paperwork,” Buentello said.

The NFT or “non-fungible token,” a digital asset that represents real-world objects such as the rights to the logo, has yet to receive any offers as of Wednesday afternoon. Rural Colorado United says the auction will be open until May 14.