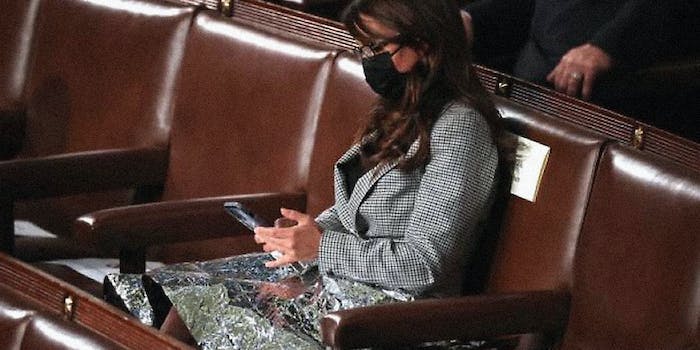 Rep. Lauren Boebert (R-Colo.) might not be getting as much attention as her fellow QAnon congresswoman, Rep. Marjorie Taylor Greene (R-Ga.), but she’s not giving up.

During President Joe Biden’s address to the nation Wednesday night, Boebert whipped out a Mylar blanket and draped it across her lap. Mylar is a trade name for products made of BoPET (Biaxially-oriented polyethylene terephthalate), a shiny, metallic substance that is used in various ways, including as blankets like those given to migrants in detention facilities.

Simultaneously, she tweeted, “Biden is responsible for violating basic human rights,” and blasted him for not mentioning “the crisis he created at our southern border.”

Border crossings have increased since Biden’s inauguration, in large part because immigrants are no longer deterred by his predecessor’s draconian policies. The influx of immigrants has proved to be a significant challenge for the Biden administration.

Boebert continued her Twitter tirade on Thursday, ordering Biden to “fix” undocumented immigration. This is a somewhat interesting demand, as Boebert is sponsoring legislation that would prohibit the president from using federal funds to enforce executive orders related to immigration.

Nevertheless, Boebert’s Mylar blanket stunt earned her an interview on Fox News and accolades from fellow Republicans, like Buzz Patterson, who gushed, “That’s how it’s done!”

Boebert’s critics used the attention grab to poke fun at her for believing in the QAnon conspiracy theory, which holds that a cabal of satanic, pedophile cannibals controls the planet.

There were many jokes about tinfoil hats.

“She takes her tinfoil hat with her wherever she goes,” commented @monarch42.

Some suggested that it was beneath the dignity of the office she holds to behave in a childish manner that, in addition to the blanket, included chewing gum, rolling her eyes, and live tweeting throughout the president’s speech.