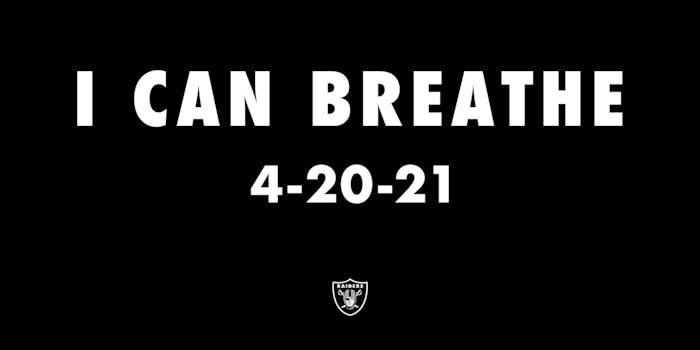 Everybody hates the Las Vegas Raiders’ ‘I Can Breathe’ tweet

'About to be a job opening on the Raiders social media department.'

Former Minneapolis police officer Derek Chauvin was found guilty in the death of George Floyd yesterday—and not everybody has responded to the news with tact. While House Speaker Nancy Pelosi (D-Calif.) was thanking Floyd for being murdered, the Las Vegas Raiders were busy masterminding perhaps the worst tweet of the day.

In the hours following the Chauvin verdict, the Vegas football team referenced Floyd’s dying words—”I can’t breathe”—with a tweet that read, “I Can Breathe 4-20-21.”

A monumental, Twitter-wide roasting commenced almost instantaneously. DJ Booth editor-in-chief Brian “Z” Zisook spoke for a lot of people in a viral tweet expressing his amazement that multiple departments approved the Raiders’ post. Somehow, this disastrous stunt made it through the communications, PR, digital, and probably legal teams.

Other Twitter users sensed an impending job opening in the Raiders’ social media department and were quick to submit their names for consideration.

The reactions continued to pour in throughout the night. Several people played on the format of the original tweet as they dragged the team, with messages like “We Fucked Up 4-20-21” and “I Need a New Job 4-21-21.”

The dragging persisted as people discovered that the Raiders’ social media team not only wrote, approved, and posted the tweet, they then pinned it to their profile. The tweet is no longer pinned and has since been replaced by a list of impending intrasquad scrimmages, but the memory remains.

Raiders owner Mark Davis told ESPN last night that the tweet was his idea, and he has no intention of taking it down. He added that he “meant no disrespect” and indicated that the tweet was a play on the Floyd family’s assertion that “today, we are able to breathe again.”

“I felt that was a powerful statement,” Davis said. “Today was a day where I can breathe, and we can all breathe again because justice was served. But we have a lot of work to do still on social justice and police brutality.”