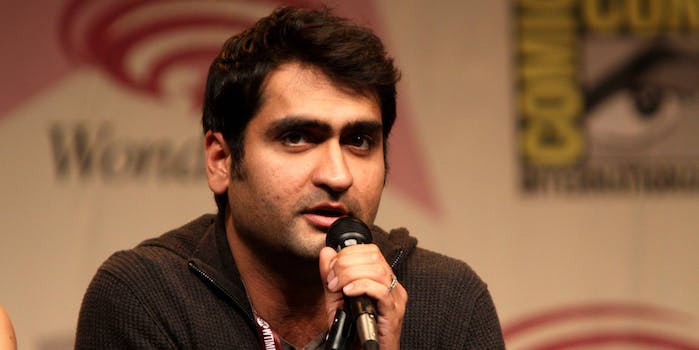 Three of the largest tech companies in the world—Facebook, Google, and Twitter—testified in front of Congress yesterday about how Russia exploited their platforms to divide Americans during the 2016 presidential election.

As the lawyers representing those tech giants deflected questions from furious committee members, one Silicon Valley celebrity ripped the industry in an epic tweetstorm.

Kumail Nanjiani, best known for playing Dinesh the coder in the hit HBO show, expressed his concerns with the tech industry in an emotional critique that slammed companies for releasing products without considering the consequences.

He teased the thread by explaining his relationship with tech firms.

He then jumped into the heart of the issue: that technology corporations care more about releasing a product as quickly as possible than what effect those products might have on society. He says there is “ZERO” ethical consideration before launching a new gadget or service that has obvious “ethical issues.”

He goes to explain that tech execs are surprised when people ask them about privacy or security as if it should only be mentioned in whispers.

And that the speed of technology makes it impossible for regulators and concerned customers to keep up with the potential consequences of new services.

Nanjiani then called out Facebook and Twitter, two companies who have been widely criticized for their handling of online abuse. Twitter recently overhauled its policies on abuse, promising to fortify its machine learning algorithms and use human reviewers to take down bullies. It also released a calendar showing all the safety features it plans to release by the end of 2017. Those changes were made after people grew outraged at the struggling platform for its seemingly unpredictable behavior when enforcing its own rules.

Facebook has faced similar criticism over the years but is now embroiled in controversy as lawmakers investigate how its ads were used by Russia to meddle in the U.S. presidential election.

Kumail didn’t hold back. He warned that tech has the “capacity to destroy us,” specifically citing the effects of social media.

We saw those potential consequences firsthand in September when North Korea interpreted a threatening tweet by Donald Trump as a declaration of war. Twitter chose not to delete the post.

“You can’t put this stuff back in the box,” Kumail closed. “Once it’s out there, it’s out there. And there are no guardians. It’s terrifying. The end.”